Awoyinfa at 70: How our father sacrificed all to train us 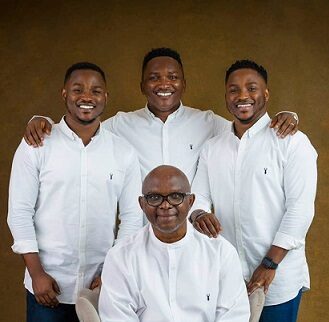 Mike Awoyinfa and his sons

This year is a special year for my brothers and me. On March 27, God blessed me with a beautiful daughter and made me a father for the first time. My brothers were not spared from this blessing as they also birthed gorgeous baby girls in January and April. Mum’s back must be aching in joy as she flies out to perform the customary Omugo.

As I stare into the flint of my daughter’s eyes, I ponder on the existential question: what does it really mean to be a good father?  In my quest for an answer, I decided to look no further than my dad, Mike Ajibola Awoyinfa, who is 70 today.

My dad is my hero and I am extremely proud of who he is and what he has achieved. Like a left-handed boxer, his style of parenting is awkward and unorthodox but highly effective in packing a punch. His achievement in journalism is even more remarkable, a testament to his grit, passion and legacy. In describing a good father, I started to draw parallels between my earthly father and our heavenly Father. I came up with the conclusion that a good father must be sacrificial in giving. Growing up, my dad gave us a piece of himself, expressed in various forms and dimensions. I reflect on these gifts and their expressions in the paragraphs that follow.

Ten years ago, I got admission to study at the prestigious University College of London (UCL). The university’s reputation came at a heavy price. I would need thousands of pounds to make the exodus to London. Dad had just abruptly been retired as the pioneer managing director of The Sun and was in a place of financial uncertainty. One thing Dad never compromised on is the gift of quality education. With three sons enrolled at Covenant University all at the same time, Dad would go over and beyond to ensure we got the best education possible. I had deferred my admission the year before due to lack a of funds. This time around Dad would leave no stone unturned to ensure my dreams and ambition came alive. Like Baba Ijebu, he took a gamble on me, sold his landed property and sent me off to London to see the Queen. The following year, without any iota of empathy, my twin brother also got admission to the highly revered Grenoble School of Business in France. Yet another barrage of landed property was whisked away as a seed for the future.

Today, your investment in us has borne so much fruit that will set the foundation for generations to come. We can never repay you for the chance you took on us.

Growing up, our household was an animal farm of books. Every morning, in the dark of dawn, we would have to fight our way through a maze of old newspapers, books and manuscripts littered across the corridors on our way to school. For Dad, his books were like liquid gold. He knew each book by its title and each newspaper print by its year and edition. He stockpiled, catalogued and referenced newspaper articles from as way back as the 80s. We lived very close to a food seller. If only we could sell some of the old newspapers, we would have been millionaires in akara and puff puff! But you dare not mess with any of Dad’s babies.

When Dad travels out for his IPI conferences, there was usually no excitement in the air about his return. We were certain he was going to come back with bags filled with even more books (**mschew**). On one of those foreign trips, Dad returned with magic—a book with a little boy with a thunderbolt scar on the front page. I believe we must have been one of the first kids in Nigeria to own a copy of the premier edition of the Harry Potter Series. As a child with untapped imagination, Harry Potter took me on a magical and mystical journey into a world of impossible possibilities. I devoured the dictionary-sized book in three days like an addict on crack. My brain synapsis must have been flaring like Edison when he discovered the light bulb. Before then, Dad had introduced us to the ‘Palmwine Drinkard’ by Amos Tututola. I was fascinated by Amos Tutuola and his literary style. The Palmwine Drinkard was ridden with errors and grammatical blunders yet was magical, intriguing and captivating just like Harry Potter after it.

After reading the ‘Diary of Anne Frank,’ Dad enforced a military regime of diary writing amongst us. At twilight, under the glare of a candlestick, we would have to write up our daily diary which would be reviewed when Dad got back from work. At the end of the week, there was usually a writing competition. Dad would ask us to read a section of Reader’s Digest and write an article based on what we have read. The winner (usually me) got prize money and laurels for his effort. As a child surrounded by books, I fell in love with reading and creative writing. Writing those articles and winning was my way of connecting with you Dad. Your delight and affirmation after reading my articles was the catalyst I needed for future success in academics, work and life in general.

Aside from books and newspapers, our house was always enveloped in music. On Saturday mornings, Dad would wake us up to raging musical madness from Nirvana as he skips to Smells Like Teen Spirit. Eventually, he would take us on a musical journey across the world. From Ali Farka Toure of Mali to Youssou N’Dour of Senegal. From Bono of U2 to the Wonderwall of the Oasis and finally to the Beatles of Penny Lane. Our musical palate was incredibly rich and diverse.

Dad was a half-baked wannabe musician back in the day and he wanted his kids to be the next Jackson 5. At home,, we had a mini-studio in his bedroom which had a mic, an acoustic guitar and a keyboard. Unfortunately, I was the only one out of his kids who had any interest in playing music. Thank you Dad for teaching me to play the guitar and the piano. I strongly believe that the ability to strum a chord and piece music together helped with my brain development and intelligence as a child.

A good name, they say, is better than silver and gold. A good father must gift his child with a name to be proud of. Dad made an honourable and reputable name for himself, which has opened numerous doors of opportunity for us his children. Dad’s work ethic is second to none. As a child, I always wondered why his room was always sparsely illuminated in the middle of the night as he typed away on the computer. Even at 70, you can still hear the spluttering of his keyboard at 2 am, still working, still writing, never fading. As an adult, I see the same zeal, passion and dedication infused into me and my brothers. In the words of the great Wande Coal, Gentility o se stupidity. I have learnt patience, empathy, gentleness and humility from you Dad – attributes which can sometimes be mistaken for weakness in this cruel world. I would rather be kind and humble than be the strongest man in the world.

The back page of a newspaper is not enough to write about you Dad. Words alone cannot express how good a father you have been to us. Mike Awoyinfa is far from perfect, like every human he is fallible and flawed but as far as my search goes, he is a perfect example of a good father and I am extremely proud to be your son. For my daughter, I promise to bring to you the gifting of Mike, refine them and make them better. Hopefully, one day, your search for a great dad will take you back to me.