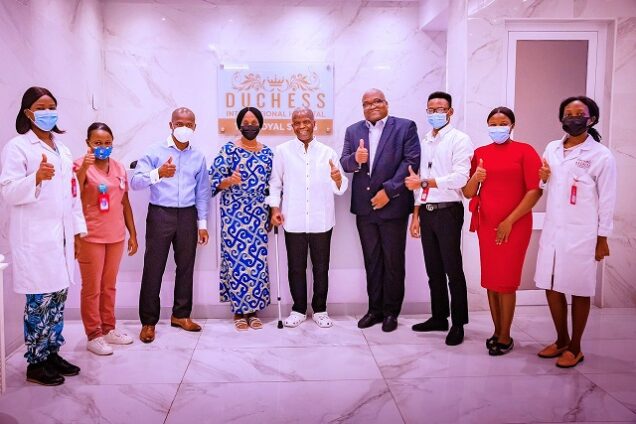 First picture of Nigeria’s Vice President Yemi Osinbajo at Duchess International Hospital, Ikeja, where he had undergone successful surgery on his leg emerged on Sunday in a statement he personally signed to express his gratitude to Nigerians for get-well wishes and prayers as he underwent the medical procedure.

Osinbajo’s spokesperson, Laolu Akande, had in a post on his verified Twitter handle last Sunday indicated that the Vice President had been admitted at Duchess Hospital for surgery over a recurring leg pain probably sustained while playing squash.

In an update later in the day, the Medical doctors at Duchess International Hospital confirmed that a surgical operation was performed on Osinbajo as a result of fracture of his right femur (thigh bone), possibly related to a longstanding injury associated with a game of squash.

The Doctors described the surgery as successful.

“The operation was successful and Osinbajo is expected to be discharged within the next few days,” Dosunmu-Ogunbi said in a statement on behalf of the doctors.

In another update on Tuesday, the Chief Executive Officer of the hospital, Dr Adetokunbo Shitta-Bey, said the vice president was making the sort of progress that was expected.

“He is model patient; we have been able to observe in very close quarters, the very essence of the man.

“He is very compliant, listens to advice and as such he is able make the sort of progress that we expect.

“He is undergoing physiotherapy as part of his rehabilitation process.

“The multidisciplinary team that has been involved with his care have been very pleased with the progress that he is making,” he said.

In his first personal statement accompanied by his picture with his medical team and his wife, Dolapo on Sunday, Osinbajo expressed his deep gratitude to Nigerians and everyone following his recent successful surgery.

Below is the full statement of the Vice President.

“My deep gratitude to everyone for your get-well wishes and prayers following my surgery.

“And special appreciation to the amazing team of surgeons, doctors, nurses, physiotherapists, and the management of the Duchess International Hospital, Lagos, for providing such excellent care.

“God bless you all.”