Terrorists to Buhari, El-Rufai: We are coming for you [Video] 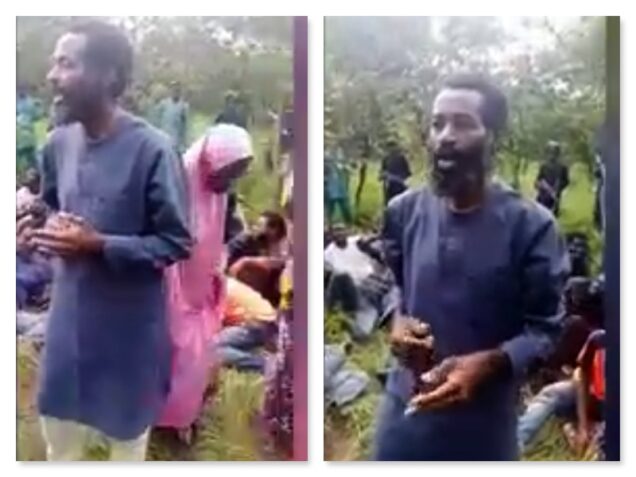 screenshot of the terrorist threatening to kidnap Buhari, El-Rufai

Terrorists operating in the Kaduna axis appear ready to raise their deadly game, as they threaten in a new video to kidnap President Muhammadu Buhari and Kaduna governor, Nasir El-Rufai.

In a new one minute video, the terrorists are seen flogging some of the victims kidnapped 28 March on the Kaduna bound train, amid cries of anguish by the victims.

After a session of beating, one of the terrorists then began to issue threats.

He boasted that they would destroy the country, kill the remaining passengers in their custody and sell out the others.

“This is our message to the government of Nigeria and just as you have seen these people here, by God’s grace, you will see your leaders; your senators and governors will come before us.

“These ones you are seeing here, we will keep some as our slaves and sell them off just as our Imam told you in the past,” he said.

“Just like the Chibok girls that were sold off, we will equally sell these ones as slaves. If you don’t adhere to our demands, we will kill the ones we need to kill and sell the remaining. By God’s grace, El-Rufai, Buhari, we will bring you here.”

Few days to the Eid-el-Kabir, the terrorists attacked the advance convoy of President Muhammadu Buhari in Katsina State.

The convoy was on its way to Buhari’s hometown of Daura.

Two persons sustained injuries in the attack, which the presidency said was repelled.

Around the same area, same day, an assistant commissioner of police was killed in an ambush.

The attacks happened on the day when the Islamic State in West Africa Province (ISWAP) invaded Kuje Prison in Abuja and freed over 800 inmates, including all the terrorists in detention.