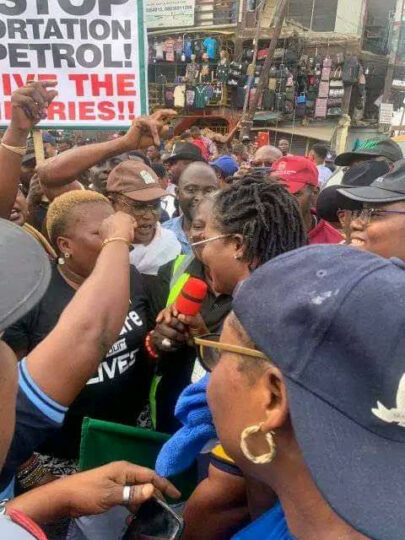 Rivers NLC during the protest

By Okafor Ofiebor/Port Harcourt
Workers and affiliates of the Nigeria Labour Congress, NLC, on Tuesday defiled the threats of sanctions by Rivers Government and trooped out in solidarity with striking Academics Staff Union of Universities, ASUU in Port Harcourt.
Led by the State NLC Chairperson, Comrade Beatrice Itubo, who is also the governorship candidate of the Labour Party, they marched from the Labour House  peacefully to Government House, Port Harcourt, that was usually beefed up with security.
Our Correspondent reports that more than a week ago, the Rivers State Governor Nyesom Wike, through the State Head of Service, HOS, Rufus Godwin, warned that any worker who took part in the solitary protest would be sanctioned according to the State Civil Service Rules.
The state government had argued that the state universities  had not been part of the about five-months nationwide strike by members of ASUU, because their salaries and emoluments were paid as at when due.
The government said it did not see the justification for the solidarity rally for ASUU in the state.
However, in her counter argument to the state government, Itubo insisted that the peaceful protest would hold in the state because “injury to one is injury to all” and that it’s  in obedience to the national directive by the national NLC.
While addressing workers at the Government House gate, Itubo warned that after two-day solidarity strike and the federal government refused to answer ASUU for students to resume school, there would be a total shutdown of both economic and social activities in the state and in the country.
“No school, no election. Our children have been at home for five months going to six months now. And a responsible government has not thought it wise to say or do anything about it. Today, we are driving home a point. This is just a tip of the iceberg. If after this and nothing happens, we will wait for further directives from the national,” she warned.
On his part, the Chairman of the Rivers State Civil Society Organization, Enefaa Georgewill, said in the next phase, if the ASUU strike continued, they would liaise with market women to shutdown economic activities in the state and across the country.
“A government whose officials send their children overseas to good schools in Europe and America have no moral justification to close our universities. If they have nothing new to tell us, they should pack and go.”
Also speaking, Levi Okon, an executive of the National Association of Nigerian Students, NANS, warned that if the ASUU strike lingered, students would be mobilised and ensure that there would be no election in 2023.
Responding on behalf of the State Government, George Nweke, Permanent Secretary, Special Services, in the office of the Secretary to the State Government, SSG, commended the workers for the peaceful disposition.
He promised to convey their message to the State Government.
The protesting workers were escorted by a detachment of armed policemen drawn from the Rivers Police Command to the heavily guarded Government House, Port Harcourt gate.
Members of NLC, who were decked in black with union’s crested T-shirts sang solidarity songs carrying banners of their unions with different messages.
On his part, ASUU’s PH Zonal Coordinator, Prof. Stanley Ogoun, told Journalists that the solidarity  rally was in the interest of all public servants and students in the country.
Members of ASUU, NUPENG, NASU, PASAN, NUJ,NUT, NANS, Health Worker Union, were in attendance.
Tags:   ASUU   Comrade Beatrice Itubo   NLC