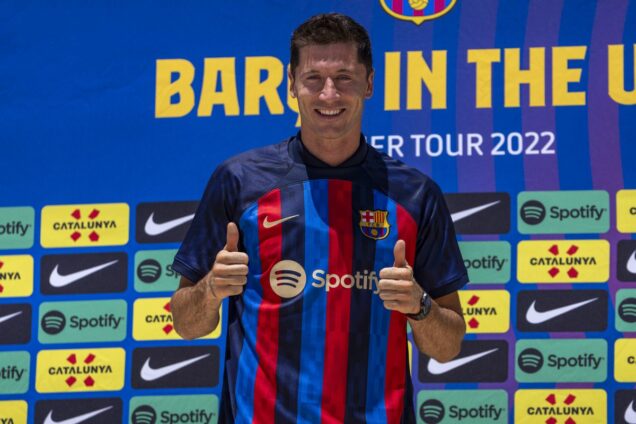 Robert Lewandowski has made a strong first impression at FC Barcelona, with manager Xavi calling him “an unbelievable signing”.

Lewandowski made his first appearance for his new club in their 1-0 friendly win against Real Madrid on Saturday, starting up top before being subbed off at half-time.

The 2021 Ballon d’Or runner-up is coming off seven consecutive seasons of at least 40 goals in club competition.

FC Barcelona is hoping he is still at the peak of his powers in spite of turning 34 years old next month.

Speaking to the media about the club’s new frontman, Xavi had nothing but praise.

He said “[Lewandowski] has adapted really well. Very humble. He’s won almost everything in the world of football.

“He has the humility to work hard for the team, and for us, he’s an unbelievable signing. So really good, really happy to have Robert in the team, and [against Real Madrid] he adapted really well.

“Lewandowski controlled the ball when Real Madrid pressed high. He understood really well when it was his moment to control and play for the attacking midfielders or for the defensive midfielder.

“He went deep many times. So, we are talking about the top player in the world of football.”

When asked if there are more signings planned, Xavi said; “Well, the more, the better,” he said. “That is, the more that can compete, the better it will make us (the) staff. They will make each other better, and they will compete with each other.

“This year, there are many games, I would say even more because there is a FIFA World Cup in between and the calendar is even more compressed.

“I think it is important that there is competition between the players. There are injuries, and (there) will be sanctions — so perfect. Barca, I have already said many times, must have two high-level players in each position, and this is what we are working on.”