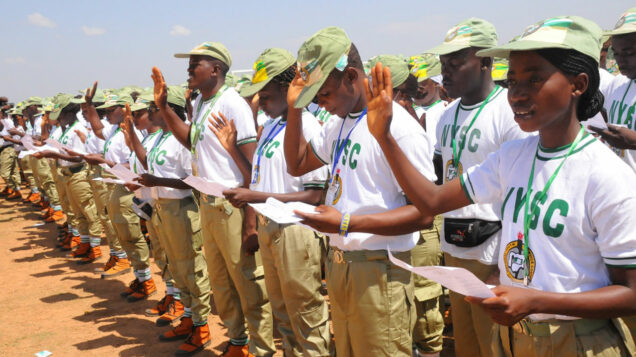 The Chief Judge of Abia, Justice Onuoha Ogwe, on Tuesday, swore in 1,128 corps members for the National Youth Service Corps (NYSC) 2022 Batch ‘B’, Stream 2 Orientation Course in the state.

The corps members sworn in comprised 582 males and 546 females.

Ogwe, who was represented by Justice Benson Anya of the state’s High Court, urged the corps members to be grateful to the nation for giving them the opportunity to serve.

He agreed that they might have left their comfort zones to areas they might not have known, but said that NYSC was as a noble experience.

He congratulated them on their successes, following their graduations from their various tertiary institutions across the nation.

The chief judge urged the corps members to abide by the Oath of Allegiance which they had taken and be good ambassadors both to the scheme and the nation at large.

“Abia is a business state and it is peaceful and free of trouble.

“Any trouble you see in Abia is the one you created yourself by not going for your work and your place of primary assignment on time.

“You must avoid unnecessary travel and nightlife because as a corps member we want you to serve alive and go back home alive,” he warned them.

The Director-General, NYSC, Brig.-Gen. Muhammad Fadah described the Orientation Course as the first cardinal programme of the scheme.

Fadah, who was represented by the Coordinator of the NYSC in Abia, Mr Julius Ekeh, said one of the objectives of NYSC was the promotion of national unity and integration.

He told the corps members that it was the reason they were deployed away from their states of origin and their assemblage at the camp from diverse religious and socio-ethnic backgrounds.

“I will like to remind you that white-collar jobs are not readily available.

“Therefore, I encourage you to avail yourselves of the opportunities for self-employment offered through the Skill Acquisition and Entrepreneurship Development (SAED) programme,” Fadah said.