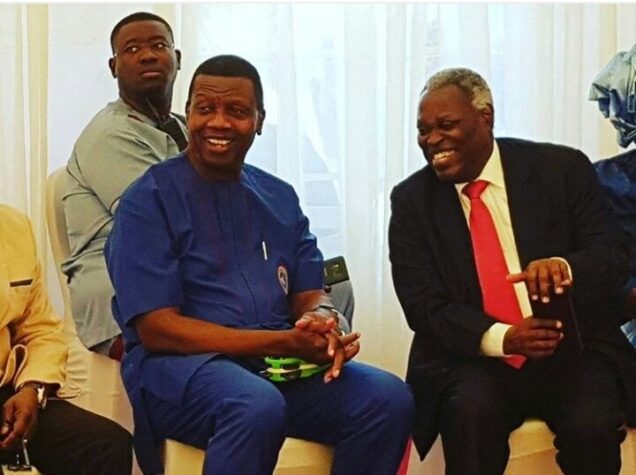 But this piece is not interested in all of that. It is about something refreshingly and positively different about these men. This remarkable quality in these two aged men should shame not only their fellow ( superstar) preachers within the denominational system but also many nondenominational teachers of the Bible.

I am talking about their political neutrality. Pa Enoch Adeboye in a recent video maintained his neutrality. He said he couldn’t be openly partisan since he commands a vast denomination full of members with different political leanings and affiliations. Wise man.
Pa William Kumuyi in his case has never been heard to openly support or oppose any candidate. Of course, he also controls a mega denomination of members with different political opinions.

Truly, PEA and PK are not living on Mars. They are aware of the large-scale sufferings of Nigerians. Like other sane Nigerians, they’d want a candidate who can steer the ship of Nigeria away from the deep mess that several administrations, especially that of Muhammadu Buhari, have plunged Nigeria into. They may even have a preferred candidate but they would rather not mention who it is in the open because it could cause division, confusion and worry in their congregations and among their fans and followers.

Concerning partisan politics, the pulpits of RCCG and DLBC at Oyingbo, Gbagada and Lagos-Ibadan Expressway, sanity reigns. Compare that to the insanity oozing from the famous but notorious pulpits at Ota, Auchi, and Abuja, among others. Meanwhile, the “miracle alert” character who controls the Auchi pulpit has not been able to successfully extricate himself from the net of a truckload of alleged sex scandals tightly spun and woven all over him. But I digress.

A bigger shame goes to recognised nondenominational preachers/teachers who claim that they have left the aberrations of denominationalism but are obsessed with promoting political candidates.

Shame also goes to preachers and teachers in the reformed circle who are openly partisan. We all know how these reformed guys carry on ( many times arrogantly) as if they are the ones with the best understanding of the teachings of the apostles of Jesus. The gospel they claim they know hasn’t taught them that open partisanship is damaging and reputation-undermining. When a reformed teacher criticises the erroneous charismaticism of the Pentecostals while being fanatical about a politician, they manifest amazing hypocrisy.

How can a supposed preacher/teacher of the word openly and relentlessly profess devotion to, say, Bola Tinubu when he has a mixed audience of lovers of Obi, Atiku, Tinubu, Kwankwso, Sowore and others?

Why won’t they just stick with teaching the Bible? And if they must make politics-related comments in public, they should be neutral and objective.

It is so shameful for a so-called preacher to identify as an Obi-dient, a BATist, an Atikulated or Kwankwasiya. And those who shout or bully others who don’t support their political idols should bury their heads in shame. They are a disgrace to the cross.

You preachers/teachers that have turned your pulpits, spaces and social media walls into mobilisation and promotion platforms, do you think if Paul or Peter were here in Nigeria, they would have done the same? You have read the Bible. Did you read that Paul meddled in the political affairs of his days other than telling believers to pay their taxes and obey the government? By the way, the evils of Buhari’s administration are nothing compared to the tyranny and wickedness of the imperial Roman government in Paul’s days.

To my fellow nondenominational teachers, I’d say you have no moral locus to criticise PEA and PK for anything if you are still openly partisan. Just shut up already.