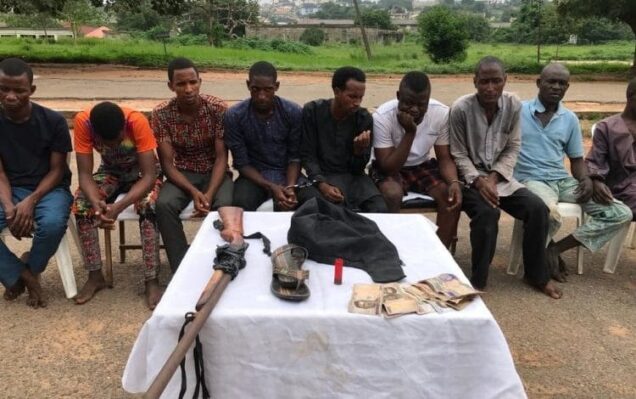 The suspects also allegedly kidnapped the owner of a private clinic, Dr Abdulraheed Oladoye, on July 22 at Gbede near Ogbomoso

Two abductees were kidnapped on July 16 and July 22 at Jabata and Gbede respectively in Surulere Local Government area.

While parading the suspects on behalf of the state Commissioner of Police, Adebowale Williams, the command’s Public Relations Officer, SP Adewale Osifeso said the suspects were responsible for the abduction of the two victims.

Williams said the command had rejigged its security architecture in a bid to rid the state of criminal elements and to cater comprehensively and qualitatively to all the people of the state.

According to the CP, all relevant sister security agencies and non-state actors will collectively meet up and resolve the yearnings and concerns of good people of the state.

“To this effect, the command today, Friday paraded the abductors of one Christopher Bakare and Dr Rasheed Oladoye, who were kidnapped on July 16 and July 22 at Jabata and Gbede via Ogbomoso axis respectively.

“The command appreciates the residents for their support and enjoined them to be unrelenting and generous with the provision of credible and timely information capable of nipping crimes in the bud at all times,” he said.