BBNaija: From ghetto to international stardom: Why everyone is talking about Hermes 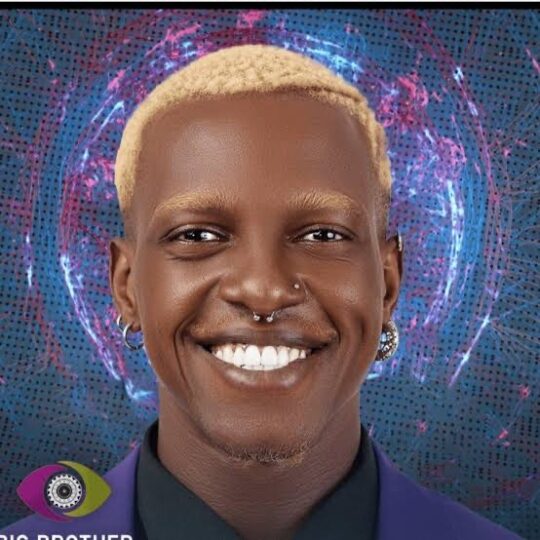 He is simply known as Hermes. But he is what the American writer William Burroughs calls the naked lunch, “a frozen moment everyone sees what is on the end of every fork.” With blonde hair, multiple piercings and lean, staggering frame that passes for one coming from the ghetto, he is easily noticeable anywhere. And he has nothing to hide.

Yet his dancing skills, his unique story and his originality have propelled him to international stardom. And everyone indeed sees not only what is at the end of the positivity and vibes that he brings but also why a book shouldn’t be judged by its cover.

This is the roller-coaster story of Hermes Chibueze Iyele, simply known as Hermes in the BBNaija Season 7, Level Up House who rose from the ghetto to international stardom by following his dreams.

This is the grass-to-grace story of the guy famous for his love for his ailing mother who went missing and he raised the alarm about it. And immediately he stepped into the House, the other housemates recognized him.

This is the startling story of the guy whose video of himself kissing his mother and gushing over how beautiful she is has gone viral.

This indeed is the intriguing story of the guy bold enough to live his truth and wear it like babariga, bold enough to confess his love for two women and yet gives them their freedom and space – a secret many don’t have the courage of conviction to reveal about themselves.

This is the fascinating story of a guy whose dance steps has made him featured in ‘videos of stars such as Burna Boy, Davido, Zynoleesky and Buju and has taken him beyond these shores. And he continues to thrill his fans with his dancing skills, vibes, fun, originality and everything that comes with his persona he has brought to the house. Many have compared him to Shine Ya Eyes reality star, Liquorose who is also a dancer

Still, the question is what is so remarkable about this guy who came from the backwaters of Oworonshoki in Lagos, who many admire for his content, for his originality for his gravitas for his sincerity, for his caring nature, for the courage of his convictions and for being true to self?

What is so compelling about this guy that he is followed by celebrities such as Kaffy and Nkechi Blessing? What is so convincing about him that Phyna and Amaka, his fellow housemate confessed that he might look rough but he is caring?

Why is it indeed that Cross of the BBNaija Shine Ya Eye fame showed his love for Hermes and carried his cross when he tweeted “I think I love Hermes, he has a very interesting mind. I would love to get to know him. Best of luck’?

The truth is, as Cross has rightly said, Hermes has an interesting mind and has nothing to hide. “I will tell the truth, no matter how hard it is,” he once said.

And many believe that why he is in great demand boils down to his intelligence, his content, his intentionality, his coherence and sense of seriousness he continues to bring to the House in his daily interactions with fellow housemates.

His temperament, even when he is in a lighter mood and even when he works, walks and converses with his fellow housemates says “I am here for business. No time for small talk.”

Many also speak about his originality, his talents and dancing skills, his willingness to be true to himself and others and also to be there for them. “I’d like to show people just how much the love and creativity that is built in such tight living circumstances can change the world and help people grow, he once said, talking about himself.

Such indeed is the stuff of Hermes’ persona, whose blonde hair, multiple piercings and haggard look sometimes erroneously give him away and make him not only to be a victim of profiling but also to have several brushes with the police and spend at least four nights every week in a police cell.

Such is the stuff of the guy who is living his truth and not afraid to reveal some certain things about his life, no matter how odious.

“His level of creativity was just absolutely beautiful. He gives me the joker vibes sometimes 😂but I mean, There’s just something about that guy man that stands out from every other contestant this season in terms of his personality, even right from the day he was introduced by Ebuka on stage. I believe he is one to watch out for this season,” Kelvin Nwachulwu, a BBNaija fan, said.

“Hermes is just another level of uniqueness, I mean there is something about this guy that hasn’t been explored yet… I think he’s spiritual, different in the way he is and what he does… every time he speaks I listen like he was talking to me,” so said another fan, Brenda Batoga.

“Hermes is an artist and he’s sensitive about his shit 😂 This man is so interesting and he has all my attention,” Megan Vorster confessed.

“Hermes is such a sweet soul,” revealed Imelda Precious

“Hermes my guy, this dude is so interesting and full of action,” enthused Naomi Gardea

In spite of the backlash he receives and all what he has gone through, the 25-year-old dancer remains true to self and continues to express his passion and creativity through his looks, body and actions. And as he has said, he hopes to bring fun, originality and creativity to the house. If that is not content, what else is?