Outrage in Italy over killing of Nigerian vendor Alika Ogorchukwu 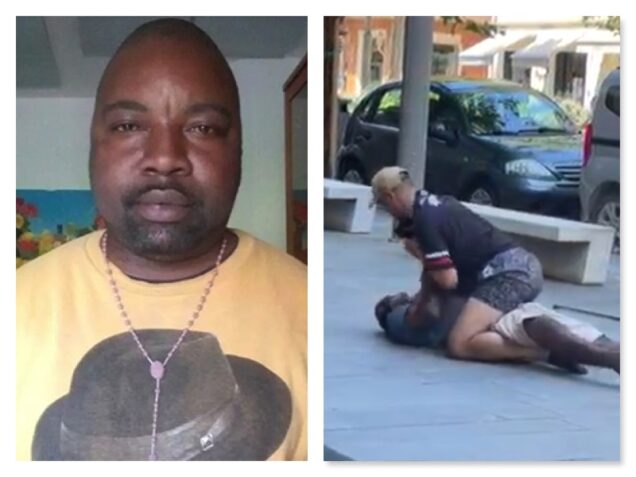 Screenshot of Alika Ogorchukwu being beaten to death in Italy

Police in Italy have arrested an Italian who killed a Nigerian vendor, Alika Ogorchukwu, by beating him to death in broad day, while being filmed by apathetic onlookers.

Video footage of the attack on a busy beach town thoroughfare circulated widely on Italian news websites and social media, eliciting outrage as Italy enters a parliamentary election campaign in which the right-wing coalition has already made immigration an issue.

“The murder of Alika Ogorchukwu is dismaying,´´ Enrico Letta, a former premier and the head of the left-wing Democratic Party, wrote Saturday on Twitter, naming the vendor who died Friday.

“Unheard of ferocity. Widespread indifference. There can be no justification.”

Right-wing leader Matteo Salvini, who is making security a plank of his campaign, also expressed outrage over the death, saying “security has no colour and … needs to return to being a right.”

Ogorchukwu, 39, was selling goods Friday on the main street of Civitanova Marche, a beach town on the Adriatic Sea, when his attacker grabbed the vendor’s crutch and struck him down, according to police.

Video shows the assailant wrestling the victim onto his back on the pavement as he fought back, eventually subduing Ogorchukwu with the weight of his body.

“The aggressor went after the victim, first hitting him with a crutch. He made him fall to the ground, then he finished, causing the death, striking repeatedly with his bare hands,” police investigator Matteo Luconi told a press conference.

He later told Italian news channel Sky TG24 that onlookers called police, who responded after the suspect had fled and attempted to administer aid to the victim. An autopsy will determine if the death was provoked by blows, suffocation or another cause.

Police used street cameras to track the assailant’s movements and detained a man identified as Filippo Claudio Giuseppe Ferlazzo, 32. He was being held on suspicion of murder and theft for allegedly taking the victim´s phone.

Luconi said the assailant lashed out after the vendor made “insistent” requests for pocket change. Police were questioning witnesses and viewing videos of the attack. They said the suspect has made no statement.

Ogorchukwu, who was married with two children, resorted to selling goods on the street after he was struck by a car and lost his job as a laborer due to his injuries, said Daniel Amanza, who runs the ACSIM association for immigrants in the Marche region’s Macerata province.

Amanza gave a different version of what happened, saying the attacker became infuriated when Ogorchukwu told the man’s companion she was beautiful.

“This compliment killed him,´´ Amanza told The Associated Press.

“The tragic fact is that there were many people nearby. They filmed, saying `Stop,´ but no one moved to separate them,´´ Amanza said.

Macerata was the site of a 2018 shooting spree targeting African immigrants that wounded six people. Luca Traini, 31, was sentenced to 12 years in prison for the shootings, which Italy´s highest court confirmed qualified as a hate crime.

“My condemnation is not only for the (crime) but it is also for the indifference,” Ciarapica told Sky. “This is something that has shocked citizens.”

Former Premier Matteo Renzi, who heads his own small party, called out political leaders for “instrumentalizing” the attack.

“I am horrified by this electoral climate,´´ he said on social media. “A father was killed in an atrocious and racist way while passersby took video without stopping the aggressor. And instead of reflecting on what we are becoming, politicians argue and instrumentalize.”

The Nigerian embassy in Rome has reacted to the killing.

“The incident occurred on a busy street, in front of shocked onlookers, some of whom made videos of the attack, with little or no attempt to prevent it,” the statement by the embassy said.

“His Excellency, Ambassador Mfawa Omini Abam has condemned the gruesome murder and has commiserated with Mrs. Charity Oriachi, wife of the deceased and the rest of his family.

“His Excellency has directed the provision of immediate consular assistance as appropriate.”

The Embassy said it is currently collaborating with relevant Italian authorities to ensure justice is served and to provide succour to the family of the deceased.

“Ambassador Abam wishes to enjoin members of the Nigerian community in Italy to remain calm and to refrain from taking laws into their hands,” the statement added.

“His Excellency wishes to reassure Nigerians in Italy that citizen’s diplomacy remained the key thrust of his administration and will leave no stone unturned in ensuring that all Nigerians in Italy receive timely, efficient and professional consular services.”