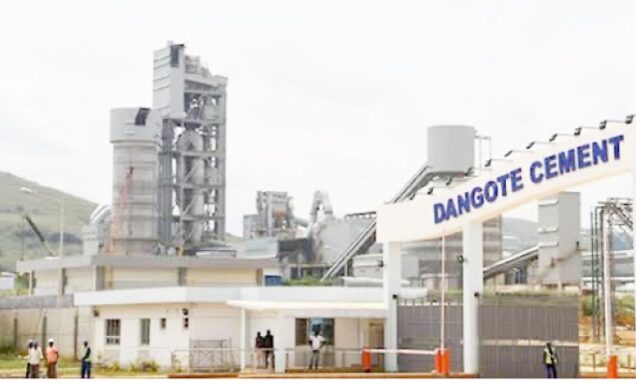 In a bid to ensure that Cement becomes available in all African countries, Chief Executive Officer of Dangote Cement, Michel Puchercos, has revealed that his company is ramping up production in its Okpella plant, Nigeria and progressing well to deploy grinding plants in Ghana and Cote d’Ivoire.

In the same vein, the Cement Plant on Monday announced, for the second quarter of 2022 a group revenue of N808 billion for the half year ended June 31, 2022, even as winners have started to emerge from the ongoing bag of goodies season 3 promo. According to the cement company’s results made available on the website of the Nigerian Exchange (NGX), revenue rose by 17 per cent, compared to N690.55 billion recorded in 2021. Dangote Cement reported a group sales volume of 14.2Mt, consisting of 9.3 Mt done by Nigerian operations while the balance was contributed by operations in other African countries.

On the result, Puchercos said: “Despite the elevated inflation due to a very volatile global environment, the first half of 2022 has been positive. We recorded increases in revenue and EBITDA that drove strong cash generation across the Group. We recorded revenue of ₦808.0 billion up 17 per cent compared to last year and Group EBITDA of ₦373.2Billion, up 6.3 per cent with an EBITDA margin of 46.2 per cent.”

Puchercos explained that a significant increase in energy and AGO costs are impacting negatively the production and supply of cement products. He added, “to drive consumer engagement and support demand ahead of the rainy season; we have commenced the 3rd season of our National Consumer Promotion – “Bag of Goodies 3”. On the operational side, we are ramping up production at our Okpella plant and are progressing well to deploy grinding plants in Ghana and Cote d’Ivoire.”

He stated that the volatile international context is strengthening efforts to ramp up the usage of alternative fuels and execution of an export-to-import strategy. The company according to him is reducing dependence on imported inputs and making the local markets self-sufficient.

“Our continuous focus on efficiency, meeting market demand and maintaining our costs leadership drives our ability to consistently deliver superior profitability and value to all shareholders” he added.

In a related development, there are confirmed reports that the first batch of winners have emerged from the ongoing National Consumer Promotion – “Bag of Goodies 3”. The winners will be receiving their prizes in a series of events lined up in the coming weeks.

Dangote Cement is Africa’s leading cement producer with nearly 51.6Mta capacity across Africa. A fully integrated quarry-to-customer producer, it has a production capacity of 35.25Mta in its home market, Nigeria.

Obajana plant in Kogi state, Nigeria, is the largest in Africa with 16.25Mta of capacity across five lines while the Ibese plant in Ogun State has four cement lines with a combined installed capacity of 12Mta.

The Gboko plant in Benue state has 4Mta while the Okpella plant in Edo state has 3Mta. Through recent investments, Dangote Cement has eliminated Nigeria’s dependence on imported cement and has transformed the nation into an exporter of cement serving neighbouring countries.