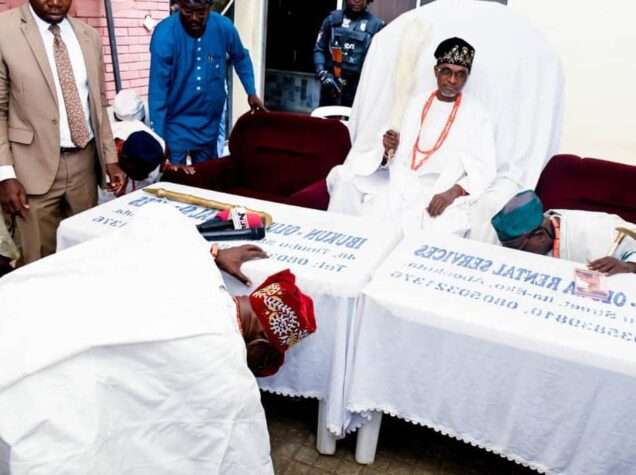 Obasanjo prostrates before the Olowu of Owu land

Former President, Chief Olusegun Obasanjo has prostrated before the new Olowu of Owu-elect, Oba Saka Matemilola shortly after his presentation to the sons and daughters of Owu land, Ogun State.

Obasanjo prostrated before the new oba on Monday shortly before he went into mandatory seclusion (Ipebi) at the residence of the former President at Itaeko.

Also at the event were some traditional rulers.

Matemilola emerged as the new Olowu of Owu Kingdom in Ogun State on July 31, 2022. His emergence came after a keenly contested election which took place among the seven candidates of the ruling houses in Owu, Ogun State.

One of the prominent members of the kingmakers who was part of the selection process was Obasanjo who is the Balogun of Owu kingdom.

Matemilola replaced Oba Adegboyega Dosunmu who died in December 2021 after a brief illness.