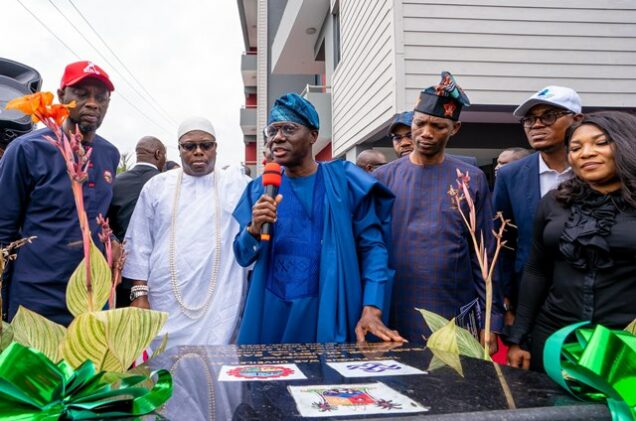 Lagos State Governor Babajide Sanwo-Olu, on Tuesday, opened a mini-housing scheme in a residential neighbourhood of Victoria Island, further raising the housing stock of the State.

The project makes it the 16th housing project completed and commissioned in the last three years by the Sanwo-Olu administration.

The Governor said the new milestone showed the result of collaboration between Government and the private sector, noting that his administration’s drive to provide affordable and decent housing for the residents through public-private collaboration had yielded positive outcomes.

Sanwo-Olu said the urban renewal agenda of the State Government remained on course, adding that the overall goal of provision of modern housing and infrastructure was to ensure that the State sustained its growth and the megacity status.

He said: “I congratulate LSDPC and Asset Brooks and Resources Limited on the successful completion of this edifice. Progress is, indeed, achievable when public and private sector enterprises come together, bringing their core strengths to the table, for the good of the entire society. This positive outcome is yet another testimony to the effective collaboration between Government and the private sector in the implementation of our agenda to provide affordable and decent housing for our people.

“I am impressed by the quality of work done by the contractor, which reflects the quality of monitoring and supervision by the LSDPC, which has sustained the high standards set long before now. We shall continue to pursue and implement this tried-and-tested model of public-private collaboration, as it has proven to be a potent strategy for keeping up with the rate of demand for housing by our rapidly increasing population.”

Sanwo-Olu said his administration had pursued its urban renewal policy vigorously, which resulted in rehabilitation and reconstruction of various infrastructure across the State.

He promised to continue to provide a supportive environment for business and investment to flourish, while improving life expectancy in the State.

The Governor said the ongoing automation and digitisation reforms in property records and land administration in Lagos were already yielding positive outcomes, stressing that the Enterprise Geographic Information System (e-GIS) being introduced by the State Government for transparent land allocation would be ready before the end of the year.

“We are giving commitment that before the end of the year, our e-GIS platform, which will unlock openness and raise efficiency in processing of property titles within weeks at applicant’s comfort zone, will be delivered. Disagreements over land titles will be a thing of the past,” Sanwo-Olu said.

The governor assured residents that provision of decent, affordable housing remained a key priority for his administration, disclosing more housing schemes were due for completion across the State.

LSDPC Managing Director, Ayodeji Joseph, described the project as “another progress” recorded by the Sanwo-Olu administration in closing the housing deficit in Lagos.

Development of the Channel Point Apartments, the agency boss said, was conceptualised during Sanwo-Olu’s tenure as the Chief Executive Officer of LSDPC. He said the site of the project had two bungalow houses before the agency converted it into a mini estate.

Managing Director of Brook Assets and Resources Limited, Ms. Lanre Sola, said the scheme offered luxury accommodation for the comfort of the allottees.

“Despite the challenges we encountered in the course of the development, including the paucity of funding occasioned by the outbreak of COVID-19, we were resilient and showed great commitment to deliver the project,” she said.