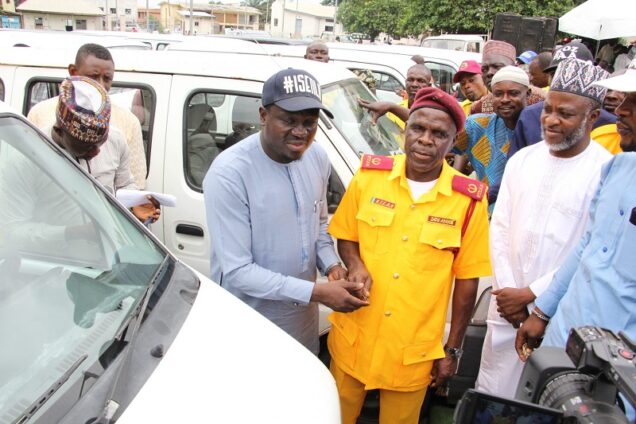 Gov. Abdulrazaq represented by the Commissioner for Works, Mr Iliasu Rotimi presents the buses to the NURTW and RTEAN officials

Gov. Abdulrahman Abdulrazaq of Kwara has donated 50 mini buses to transporters in the state as part of his empowerment programme.

Abdulrazaq presented the buses to the National Union of Road Transport Workers (NURTW) and Road Transport Employers Association of Nigeria (RTEAN) on Tuesday in Ilorin.

He said the gesture was intended to enhance their business and economy.

The donation was made by the government in partnership with a finance company.

Abdulrazaq, who was represented by the Commissioner for Works, Mr Iliasu Rotimi, also said that the donation was meant to ease the transportation of goods and commuters in the state.

He said that the event was the second phase of his administration’s community transport intervention project.

He said that the first phase of the intervention took place in August 2021.

The governor said that the administration also donated 100 tricycles to the Tricycle Owners and Operators Association of Nigeria.

He advised the beneficiaries to take advantage of the government’s kind gesture to enhance their economy.

He also said that they were expected to repay N3.7 million on each of the vehicles within 18 months.

“This intervention is worth N125 million as provided by Self Employment Assistance Program (SEAP).

“The government on its part guarantees the facility for the benefit of our people,” he said.

Abdulrazaq commended the management of SEAP for always supporting the state, particularly in the area of transportation.

He said: “We want to ensure shared prosperity.

“We have also created direct and indirect jobs to take many of our young population out of idleness through various interventions.

“We are confident that your meticulous use of these vehicles will generate more economic values for our people.

“It is my belief that NURTW and RTEAN will continue to partner our government as we strive daily to give our people a new lease of life.”

The Senior Special Assistant to the Governor on Community Intervention, Mr Kayode Oyin-Zubair, also urged the transporters to make maximum use of the opportunity to improve their economy.

Oyin-Zubair further appealed to them to always save money from their daily proceeds to make repayment easier.