Gbenga Power joins race for House of Reps, moves to ADC with supporters 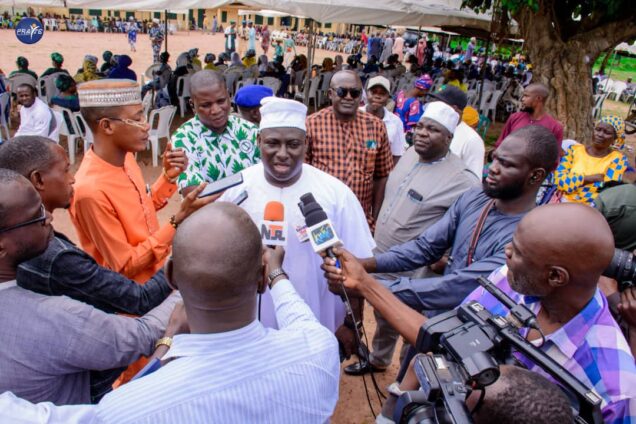 The ancient town of Omupo in Ifelodun Local Government Area of Kwara State yesterday witnessed a colourful and huge political gathering when the acclaimed philanthropist and political stalwart, Honourable Gbenga Oyekunle Power declared his House of Representatives bid in the 2023 elections before a mammoth crowd of supporters and well-wishers.

The occasion also witnessed the public declaration of the decision of the politician and his supporters to pitch their tents with the African Democratic Congress, ADC, going forward.

The colourful gathering of ADC supporters and beneficiaries of the philanthropist’s programmes had in attendance ward leaders, community elders, women leaders, co-ordinators of the Gbenga Power Foundation and representatives of professional and artisan groups in Ifelodun, Offa and Oyun Local Government Areas of the State.

In what political pundits in the State have described as unprecedented and a clear signal that Honourable Gbenga Oyekunle Power looks good to coast home to victory in the election, the thousands of supporters who thronged the St Michael Primary School, Omupo grounds of the gathering vividly projects how popular the philanthropist is among his constituents.

A community leader and politician in Offa Local Government Area, Engr Kanmi Adetunji described the turnout at the political event as a positive signal for the philanthropist’s House of Representatives bid.

“You can see for yourself. Even if a governorship aspirant records this type of huge turnout of supporters and admirers at his political rally, he will be reassured that truly his people are behind him.

“For us, it is a payback time. Hon Gbenga Power has served us and impacted positively on the people of his constituency all these years. Now is the payback time. We owe him this. He earns our support.”

A United Kingdom-based community leader and Elder from Ifelodun Local Government Area, Prince Funsho Ladipo, expressed satisfaction at the turnout of Hon Power’s teeming supporters, noting that it could not have been otherwise.

” Honourable Gbenga Power is our true representative and the event of today bears vivid testimony to this fact. While a contestant needs the platform of a political party to contest, it is also a statement of fact today that a true man of his people will win election hands down, irrespective of which party he belongs. Gbenga Power comes prepared for this race and victory is certain by God’s grace.”

Signals that the political declaration event will witness astounding success and huge turnout became clear a day before the rally when the Gbenga Power Foundation coordinators and key stakeholders met at Omupo, where they all pledged their total support for the Gbenga Power House of Representatives bid irrespective of their political affiliations.

Stakeholders from all the wards across Ifelodun, Offa and Oyun Local Government Areas affirmed their commitments to ensuring the success of the philanthropist in the forthcoming election.

In his speech, Hon Oyekunle Power, expressed his appreciation to his teeming supporters, noting that every decision taken in respect of his political journey has been a collective one.

On the reasons why he thinks he is the best candidate for the House of Representatives in his Constituency, Hon Gbenga Power noted that having committed hundreds of millions of his hard-earned money into philanthropic activities such as the sinking of boreholes, schools renovation and rehabilitation, health care, soft loans for artisans etc, he is not in doubt that he will judiciously utilise public resources to alleviate the conditions of his constituents when he gets to the office.
“Our resolve is to deploy public resources to enhance the standards of living of our people.”