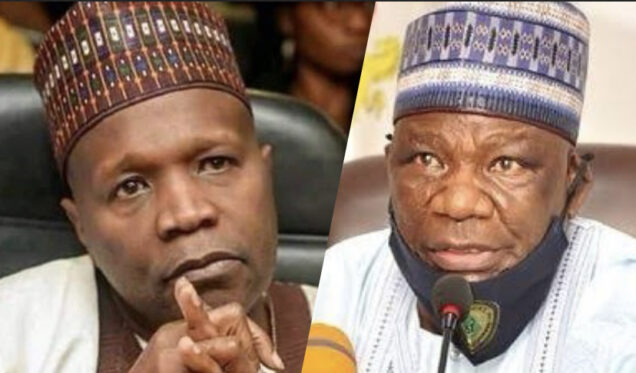 The Peoples Democratic Party (PDP) in Gombe has asked a Federal High Court in Abuja to disqualify Governor Inuwa Yahaya and his Deputy, Jatau Daniel, from contesting the 2023 Governorship Election.

The party accused the two politicians of submitting forged certificates.

PDP and its governorship candidate, Muhammad Barde sought the disqualification in Suit No: FJC/ABJ/CS/1301/2022 between PDP & two others against the INEC & others.

In an Originating Summons filed by two Senior Advocates of Nigeria, Chief Arthur Okafor, and J.J. Usman, on behalf of the plaintiffs, the party relied on a series of Supreme Court decisions.

The PDP said that Yahaya and Jatau, having deposed to FORMS EC-9, the said forms constituted Certificates, and making a false statement in them amounted to submitting forged certificates.

This, according to the party, is a disqualifying ground under Sections 177(d) and 182(1)(j) of the Constitution of the Federal Republic of Nigeria, 1999 (as amended).

In the court processes, the plaintiffs alleged that Jatau bears multiple names on his certificates, to wit: Certificate of Primary Education (Manassah Jatau).

The plaintiffs alleged that in 2022, Yahaya submitted FORM EC-9 (Affidavit of Personal particulars of Person seeking election into the office of governor of Gombe state).

“That Yahaya in 2018 while presenting his personal particulars to INEC to participate in the Gombe state governorship election, stated in his INEC FORM CF001 that he worked with A.Y.U & Co. Ltd. from 1980 to 1990.

According to the plaintiffs, Yahaya’s deputy attached his Certificate of National Youth Service Corps dated July 31, 1980, which stated thus:

Furthermore, the plaintiffs contended that the deputy governor who claimed to be working with the Nigerian Army from the period of August 1979 till July 1980 submitted an NYSC discharge certificate with contrary information.

They alleged that the NYSC discharge certificate stated on its face that Jatau commenced his National Youth Service in August 1979 and completed the same in July 1979.

Also, the plaintiffs contended that from paragraph D of Jatau’s INEC Form EC-9, he claimed that he worked for the Nigeria Army from July 1979 till August 1980 and his reason for leaving the Nigeria Army in July 1980 was for the National Youth Service.

The plaintiffs contended further that in Jatau’s INEC FORM EC-9, he commenced his NYSC after he left the Nigeria Army in July 1980 but submitted an NYSC Certificate that stated he commenced his National Youth Service in August 1979 and ended in July 1979.

The PDP argued that FORM EC-9 being an affidavit on oath, both Yahaya and his deputy, haven made false statements therein, had committed forgery, and therefore not qualified to contest the state election.

No date has been fixed for a hearing in the suit.