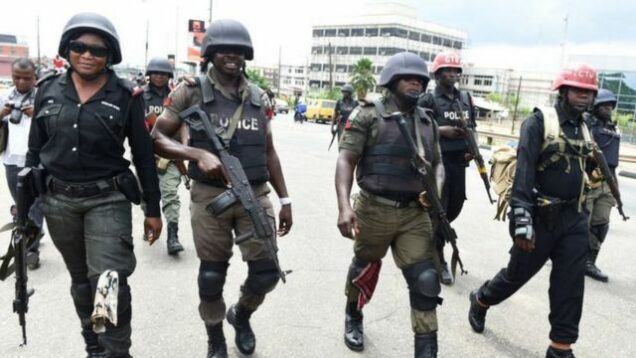 Operatives of the Special Weapons and Tactical Team of the Nigeria Police, SWAT have arrested four security men attached to a property at Chevron Drive area of Lekki for stealing.

They were charged before a Lagos Magistrate’s Court for allegedly stealing properties valued at N855,000 and damaging a container valued N2m belonging to the Complainant and Chief Executive Officer of Adamakin Investment Works Limited, Akin Folabi Akindele.

Police further claimed that following the incident, the complainant petitioned the Inspector General of Police who gave a marching order that the matter be investigated.

After investigation of the case in Abuja, the Police transferred the case to the Commissioner of Police, CP in charge of SWAT at the FCID Annex located at Adeniji Adele Road, Lagos Island, Lagos for further investigation leading to the arraignment of the defendants at the Tinubu Magistrate’s Court, Lagos on a four-count charge bordering on conspiracy, malicious damage and stealing.

Police Counsel, CSP Charles Onwumere told the court in the charge marked P/16/2022 that the defendants committed the offence on 24 June, 2022 at Chevron Drive, Lekki, Lagos where they were detailed to guard a landed property in possession of the complainant.

Onwumere informed the court that the defendants who were employed to guard and protect the properties stole the complainant’s seven mattresses valued at N300,000, eight standing fans valued at N85,000, one LG Television valued at N120,000 and one thermocool generator valued at N350,000, with a total value of N855,000.

Onwumere further told the court that the defendants also maliciously damaged a container valued at N2m belonging to the complainant, Akin Folabi Akindele.

The defendants, however, pleaded not guilty to the charges and Magistrate O.M Abioye granted them bail in the sum of N300,000 each with two sureties each in like sum.

Abioye adjourned the case till 8 August, 2022 for mention and ordered that the defendants be detained at the Ikoyi correctional facility till they perfected their bail conditions.