Akeredolu swears in Kayode Ogundele as 15th Head of Service 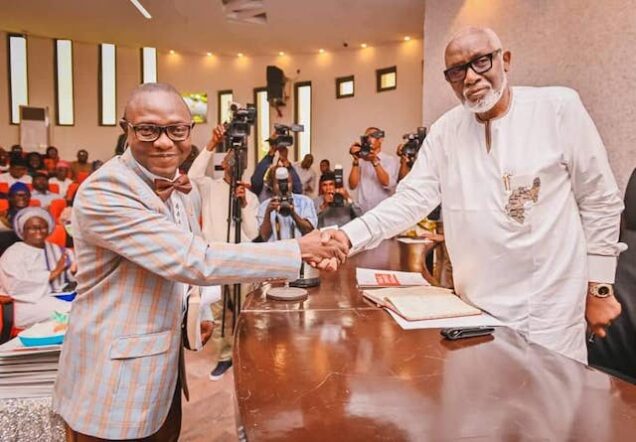 Kayode Ogundele with Akeredolu on Wednesday

Akeredolu, at the swearing-in ceremony, said that Ogundele’s appointment was based on his rich and inspiring record of service to which people attested.

He congratulated Ogundele on being considered worthy to serve as the number one civil servant of the state.

The governor expressed hope that his elevation would justify the expectation of quality service and unalloyed loyalty to the state.

Meanwhile, he advised the new head of service to maintain and surpass the performance of his predecessors. According to him, the understanding between the government and labour was maintained throughout their stints in office.

“Our administration set out with the pledge not to owe workers. We met arrears of salaries spanning seven months. We have been able to offset six months.

“We paid salaries as and when due. Deserving members of staff were promoted. We have been encouraging the service to uphold the principles of equity and fair play.

“The disruption in the course of progression notwithstanding, our administration continues to put the welfare of workers on its priority list. We thank all those who appreciate and reciprocate this gesture.

“The new Head of Service has served in virtually all ministries and agencies of the Ondo state government before the latest appointment. It is expected that he will bring this wealth of experience to bear on service delivery,” he said.

In his remarks, Ogundele thanked the governor for finding him worthy to lead the state bureaucracy as the Head of Service.

Ogundele said that his appointment was a call to service with the expectation of extensions of frontiers of impactful and purposeful governance.