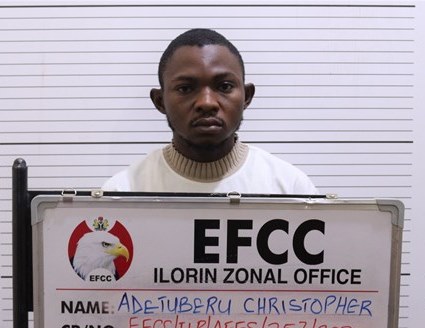 EFCC, in a statement issued by its spokesman, Wilson Uwujaren on Thursday, said the suspect’s arrest followed credible intelligence on the activities of fraudsters otherwise known as “Yahoo-Yahoo Boys” within Ilorin metropolis and its environs.

“Items recovered from the suspect at the point of arrest include a Lexus Car with registration number RBC 126 BJ, Laptop, iPhone 11 Pro Max and Samsung S9 Plus.

“In the course of investigation, Adetuberu revealed that he ventured into ‘Yahoo Yahoo Business’ in 2016 and had among other things built a house and sponsored himself in school with the proceeds of the illegal activities,” he said.

Uwujaren also said the operatives of the EFCC, in another operation arrested two other suspected fraudsters at different locations within Ilorin metropolis.

“Upon interrogation, Muhammed, 25, confessed that he joined ‘Yahoo-Yahoo business’ in 2020 and specialized in dating/love scam. According to him, he had bought a Toyota Camry with registration number KSF 846 HG worth N2.7million and built a house with the proceeds of the illegal activities.

“In the same token, Olayiwola, 30, who claimed to be a ’Loader’ in the ‘Yahoo-Yahoo business’ confessed to have bought a Toyota Camry car worth over N2million with the proceeds of the alleged crime.

“The suspects will be charged to court upon conclusion of the ongoing investigations,” Uwujaren said.