What transpired when Tinubu, Shettima met Buhari in Abuja (Photos) 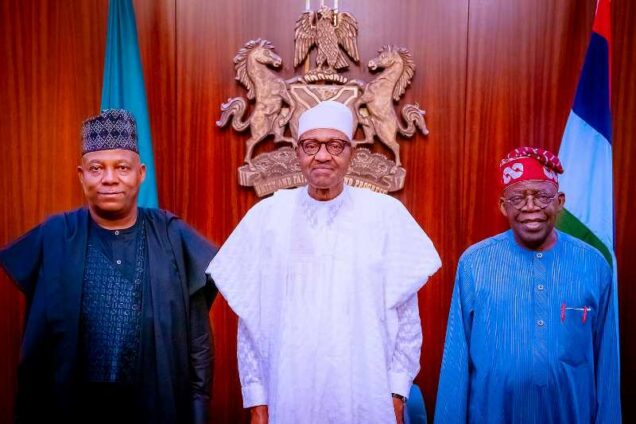 Shettima, Buhari and Tinubu during the meeting

The APC Presidential candidate, Asiwaju Bola Tinubu and his running mate, Kashim Shettima on Thursday met with President Muhammadu Buhari at the State House, Abuja.
Also at the meeting were the APC National Chairman, Senator Abdullahi Adamu and Plateau State Governor, Simon Lalong.
At the meeting, Adamu informed the president that Lalong has been made the Director-General, APC Campaign Council while Festus Keyamo, Minister of State for Labour and Productivity is the spokesman of the council.
Katsina-born lawyer Hannatu Musawa will serve as Keyamo’s deputy.
The meeting was to brief the president about progress being made to actualise the presidential ambition of Asiwaju.
The APC presidential candidate is aspiring to become the president of Nigeria next year to replace Buhari, whose tenure will expire on 29 May, 2023.
The Independent National Electoral Commission (INEC) has fixed September 28 for presidential campaign to kick-off.
Tinubu, 70, is a Nigerian accountant and politician who served as the Governor of Lagos State from 1999 to 2007 and Senator for Lagos West during the brief Third Republic. In June 2022, he was chosen as the All Progressives Congress nominee in the 2023 Nigerian presidential election.
He will slug it out with the PDP Presidential candidate, Atiku Abubakar, the Labour Party candidate, Dr. Peter Obi, among others.
Tags:   Asiwaju Bola Tinubu   President Muhammadu Buhari