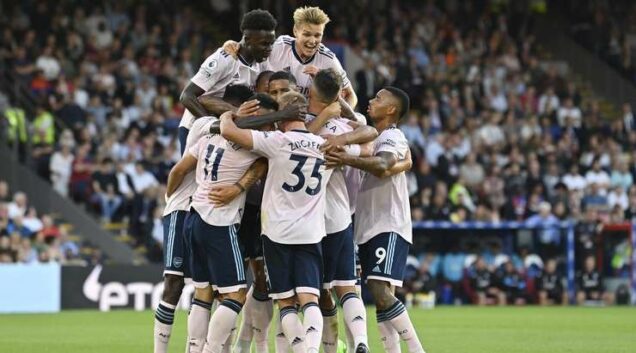 Arsenal beat Crystal Palace 0-2 on opening day of the English Premier League (EPL) on Friday to kick-start their push for a league title.

Gabriel Martinelli scored the first goal of the 2022/2023 EPL season, as he struck on 20 minutes to give the Gunners the lead at Palace.

A perfect lofted pass from Oleksandr Zinchenko found Martinelli, who jumped highest and steered a close-range header straight into the bottom left corner.

His effort was both strong and precise, and Guaita had no chance of stopping that.

The visitors got their second goal on 85th minutes from Marc Guehi’s own-goal.

Guehi attempted to head the ball away after a cross into the penalty area, but instead he accidentally sent it inside the left post of his own goal and the goalkeeper was helpless.

Earlier, Martinelli was furious with himself as he missed a clear opportunity on four minutes into the game. He sent a rebound a few inches wide of the right post.

On 52 minutes, Eberechi Eze received a precise pass and was given time inside the box to send a promising strike towards the middle of the goal.

Aaron Ramsdale guessed his intention and denied him with a fine save.