Ehingbeti 2022 and unveiling of 30 years Development Plan for Lagos 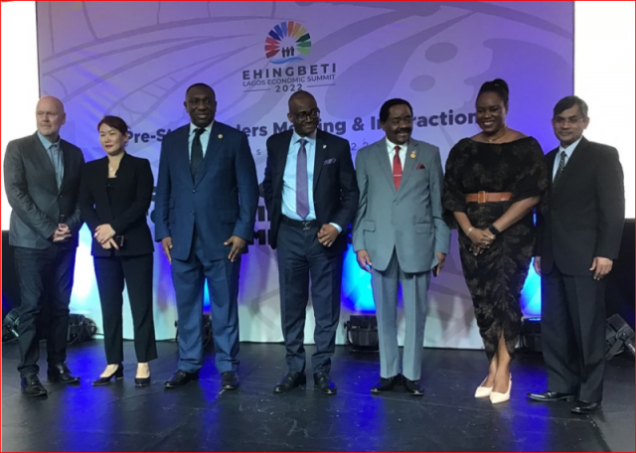 Sam Egube and other key stakeholders

Preparation has reached advanced stage for the hosting of the 2022 Lagos Economic Summit known as ‘Ehingbeti’ between October 11 and 12 to map out future plans for the development and repositioning of Lagos as a Africa’s largest city.

One of the highlights of this year’s summit, with the theme: “Charting the Paths to Sustainable Socio-Economic Growth,” is going to be the unveiling of a 30-year Lagos State Development Plan (LSDP), spanning between 2022-2052.” The former development plan 2012-2025 is billed to elapse three years time.

In order to ensure that nothing is left to chance, the Lagos State Ministry of Economic Planning and Budget, held a Pre-Summit Stakeholders Interaction at the Eko Hotel and Suites on Thursday, August 4, 2022. The pre-summit was attended by top government officials, private sectors top echelons, foreign envoys, among others to chat a new path for Lagos.

Over the last 20 years, recommendations from Ehingbeti have helped the Lagos State Government to focus on areas that concern the citizens, investors, and businesses with positive results achieved.

Commissioner for Economic Planning and Budget, Sam Egube set the tone for what to expect at Ehingbeti 2022.

Giving a background to the summit, he said the Ehingbeti Economic Summit has been the convening of advocates, passionate about the emergence of the most vibrant, diverse, competitive and inclusive African mega city.

​”They gather to discuss about the pertinent issues that affects the growth of Lagos State, Nigeria, and decide on the necessary pathway to achieve the desired outcome for Lagosians and provide progressive leadership for the nation.

​”The Lagos Economic Summit (EHINGBETI) dates back to 2000 and it was borne out of the strong desire by the state government to accelerate economic growth and development of Lagos, and is now firmly established as a credible forum for the stimulation of economic growth in Lagos State,” he said.

Egube stated that from its early stages, the Summit had been an avenue for the private sector to evaluate the implementation of key initiatives that were agreed as resolutions at the various summits. He said from the 222 resolutions reached since the summit began in year 2000, at least, 202 resolutions had been implemented. “It shows the level of accountability and that Lagos State is responsible to its people. 95 percent of the resolutions have been implemented so far,” he said.

The commissioner disclosed that Ehingbeti 2022 has three main objects, one of which is the introduction of the Lagos State Development Plan (LSDP) 2022-2052, an all-encompassing master plan which clearly articulates initiatives that will drive Lagos’ ambition to become Africa’s Model Mega City, a global, economic and financial hub that is safe, secure, functional and productive.

He added that the summit would to engagement with high-powered speakers and thought leaders on the strategic dimensions and focus areas of the LSDP 2052 and provide opportunities for engagement with the audience, as well as to formally launch the LSDP 2022-2052.

Some of the expected outcomes include reconfirmation of Lagos’ vision to become Africa’s Model Mega City, a global, economic and financial hub that is safe, secure, functional and productive; kick-off of the communication process on the LSDP’s strategic dimensions and objectives, including details on the initiatives supporting these objectives; clear common roadmap for implementation of the LSDP 2052, including the buy-in from key private sector stakeholders in supporting the plan and its objectives and official launch of the LSDP 2052 by unveiling it to the public and engaging a wide audience on the plan’s vision, strategic dimensions and objectives.

He explained that the development of the LSDP 2052 is being conducted in five phases. such as conducting baseline and target setting, priorities focus areas and identify key enablers, developing strategic milestones and initiatives, among others.

“More than 12,000 Lagosians provided insight into the plan, what they expect from Lagos in the next 30 years. We held lots of focus group discussions on this. One of the main enablers or carrying out the plans are the Lagos State Civil Servants. Extensive consultations were made with neighbouring states,” he said.

Some of the areas the development plan seeks to address are wholesale and retail, education, healthcare, housing, safety and security, transportation, power and energy, internet connectivity, water and sanitation and so on.

Special Adviser to the Governor on Sustainable Development Goals and Investment, Mrs Solape Hammond said Ehingbeti is a great tradition of Lagos and the ambition Lagos is striving to be.

“The secret of Lagos is in the partnership with the private sector, media and others. We ask our stakeholders, we ask for your support in considering this agenda and sending your comments to us through established channels,” she said.

Netherlands Ambassador to Nigeria, Harry van Dijk, said “We love to work with Lagos State, Lagos State Government has a great vision to make things better for Lagosians. We focus more on diversifying the economy, in all fairness, Lagos and southwest Nigeria have the economic potentials, the entrepreneurial skills and so on.”

Amarakoon Bandara, Senior Economic Advisor, United Nations Development Plan, UNDP Nigeria, urged the state government to look at the challenges that had not been resolved from past resolutions and ensured that they were tackled.