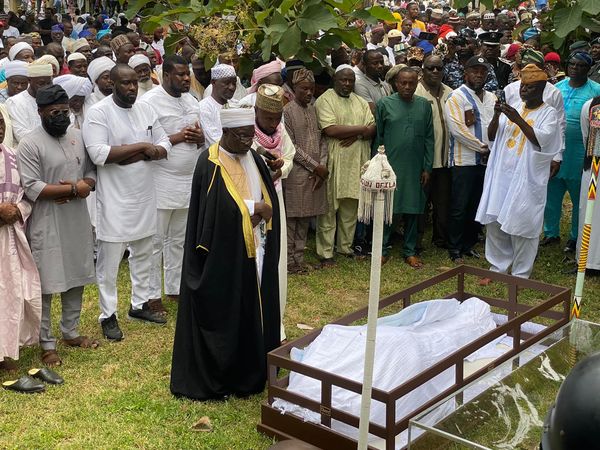 Former Inspector-General of Police, Mr Tafa Balogun, was buried in his country home of Ila-Orangun, Osun, on Saturday.

Balogun was appointed Nigeria’s 21st Inspector-General of Police on March 6, 2002. He left the office in 2005.

He passed on in Lagos on Thursday, four days to his 75th birthday.

The funeral prayer was observed in accordance with Islamic rites at the Ila-Orangun Central Eid Praying Ground.

Chief Imam of Ila-Orangun, Dr Abdulhammed Salahudeen, presided over the burial prayers where he preached the need for humans to discharge good deeds as death is inevitable.

Former Inspector-General of Police, Solomon Arase, who spoke with newsmen at the side-line of the burial, described Balogun as one of the greatest gentle police officers Nigeria has ever produced.

Arase described the departed IGP as a mentor and a father who impacted a lot of police officers intellectually.

“He was an operational icon, intellectual to the core; a cerebral officer. Even in death he remains my mentor and benefactor.

“He was like a big father when it comes to policing difficult issues. You can always go to him for advice and we will miss him for that,’’ Arase lamented.

NAN reports that the Commissioner of Police in Osun, Mr Olawale Olokode represented the current Inspector-General of Police, Mr Usman Alkali Baba at the burial.