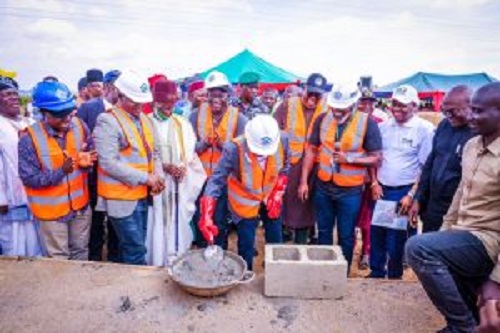 Gov Simon Lalong of Plateau , at the ground breaking ceremony for the provision of 844 units of houses for workers , on Friday at Zanwra in Miango District of Bassa Local Government

The Plateau government has inaugurated the construction of 844 housing units at Zanwra in Miango District of Bassa Local Government Area of the state for workers.

Speaking while performing the ground-breaking ceremony, Gov. Simon Lalong of the state described the housing unit as “a dividend of peace in the area”.

He said the project would bring succour to workers by enabling them to have access to modern affordable housing, with a flexible payment system.

He commended Nigeria Labour Congress (NLC) for prioritising access to affordable housing for civil servants, through its collaboration with the Federal Housing Authority and the Federal Mortgage Bank (FMB).

“Through the Workers Housing Estate, our civil servants will no longer have cause to worry about owning a house or renting accommodation since there is a mechanism for them to own one under very friendly terms,” he said.

He said the state government in collaboration with FMB has provided home renovation loans worth N2 billion to more than 2, 500 civil servants to assist them to address housing challenges.

The governor said that a committee headed by the Head Of Service had been constituted to establish the residential houses, offices, farms lands and all assets owned by the state.

“The committee will also advise the government on which of the property could be given out on owner occupier and those to be redeveloped under public-private partnership,” he said.

He urged the developer of the housing units to ensure compliance to development control standards, adding that the houses should be constructed according to approved plans to prevent building collapse.

In another development, the governor expressed concern on misinformation disseminated on social media, that the state government has ceded Jos Main Market to Jaiz Bank Nigeria Plc. through its proposed rebuilding contract.

“We are going into a partnership that will see the bank funding the rebuilding project 100 per cent and sharing the shops in a 40-60 per cent ratio for the purpose of lease only.

“The 40-year lease is for individuals that will buy the shops and not the bank.

“I appeal to our people not to pay attention to the propaganda and political exaggerations being peddled that the market will be sold out to an Islamic bank,” he said

Earlier, in his remarks, the state Head of Service, Mr Stephen Hyat said “the housing unit occupies 40 hectares of land and will boost the wellbeing and productivity of workers”.

Hyat said that 2,956 workers were beneficiaries of the modern housing scheme by the government, which would improve the economy through ownership of land documents, which could serve as collateral to access loans for businesses.

In his remarks, the paramount ruler of Irigwe nation, Bra Ngwe Irigwe retired Rev. Ronku Akah, thanked the governor for implementing the housing unit in his chiefdom, saying it would expose the area to holistic development.

Also, the Chairman of NLC in Plateau, Mr Eugene Mangi, thanked Lalong for conceiving the housing unit and actualising it, saying, “26 attempts were made before to construct housing units for workers to no avail”.

He thanked the governor for constructing access roads to the housing units while expressing hope that the houses would be completed between 15 months and 18 months.

Speaking at the event, the partner for Drallop Services, the contractors for the housing units, Alhaji Suleiman Imani of Imani Property Do, Jos, said that more than 1,600 jobs would be created in the execution of the project.