Many children feared dead as measles ravages communities in Rivers 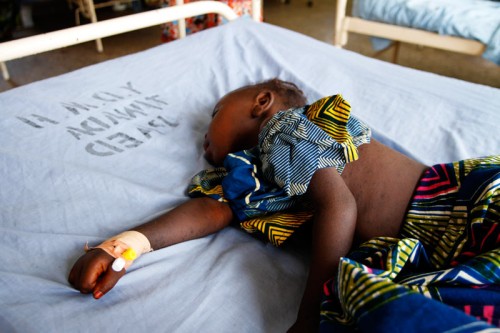 FILE: A child suffering from measles

Scores of children have been killed following a measles outbreak in Kugbo Clan of Abua-Odual Local Government Area of Rivers State.

“We have a situation that is ravaging the Okugbo Clan,” Marcus explained. Emakgbo, Akani, and Akpotu, to be exact. And the situation in question is measles.

“From what we saw and confirmed, 20 children died in Akani-Okugbo. Then again, if you go to Amuruotoru, we have the same problem. We have up to 15 documented cases.

Also speaking, Edoghotu Edwin Sinclair, the Youth Leader of Emago-Kugbo community, who said he visited other communities to assess the situation, urged the state government to come to the people’s aid.

“The current situation is dire. Measles has infiltrated the community, and the children are suffering as a result. In Emago, over 15 children have died.

“The problem has spread to Akani and Amuruotor. And we’re asking the government for help because there aren’t enough health workers to deal with the situation,” Edwin explained.

Meanwhile, a health expert, Dr. Eli Sokarimie, claims that a recent report on the prevalence of measles in Nigeria shows that Rivers State has the lowest rate.

Sokarimie, executive director of the Mother Baby and Adolescent Global Health Foundation said the outbreak of measles in the area could be attributed to a lack of surveillance, failure to immunize babies, and a lack of sensitization.

“Rivers State had the lowest prevalence of measles infection, with 11 per 100,000 cases.”

“However, reports show that the prevalence of measles among children under the age of five has been steadily increasing in Nigeria.”

“At the moment, there has been an outcry of measles infection in parts of the state, particularly in Abua/Odual local government area.”

The State government is yet to speak on the matter. River State Ministry does not have a substantive Commissioner as Governor Nyesom Wike was yet to appoint a new one for the Ministry after sacking his cabinet.

Permanent Secretary, Ministry of Health, was also said to be attending a line up of commissioning projects programme in Port Harcourt at the time of filing this report.