Mixed reactions trail FG’s plan to ban use of motorcycles 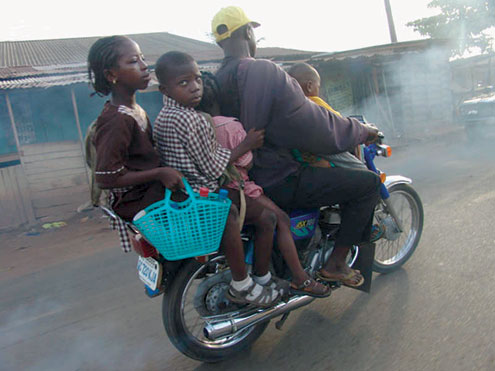 A motorcyclist conveying four kids to school in Lagos. This is what the government wants to ban. PHOTO: OLATUNJI OBASA.

Residents of the Federal Capital Territory (FCT) have expressed mixed feelings about the Federal Government’s proposed nationwide ban on the use of motorcycles.

The Federal Government’s move is part of its strategy to curb terrorism and other heinous crimes where motorcycles are largely used by perpetrators.

Speaking with newsmen, some residents commended the directive while others advised the Federal Government to rescind the decision.

Mr Sunday Uche, a commercial motorcyclist, said that the proposed ban would bring more hardship to him and his family if actualised.

“I will not be able to provide for my family if the Federal Government bans the operation of motorcycles because it is my only source of livelihood.

“The proposed ban on commercial motorcycles nationwide will not only send thousands of youths into the labour market but will also affect motorcycle parts dealers negatively,” he said.

Mr Victor Dawara, another motorcyclist operating in the Gwagwalada area said that the ban would affect average Nigerians who could not afford a car.

Mrs Esther Udoma, a housewife and Gwagwalada resident, said the nationwide ban on motorcycles would increase the rate of crime and insecurity in the country.

“It will be very difficult for those of us who reside in the remote areas, because of the bad road network.

“The Federal Government should not ban commercial motorcycles because it saves time and is also cheaper than other means of transportation”, she said.

Usman Mohammed, a mechanic in FCT said the ban would increase poverty and people would not afford three square meals for their families.

Mr Sani Lawal a Jabi resident, described the proposed ban as a punishment against many, for the sins of a few people.’

According to him, “I don’t have a car and from my house to where I will get a vehicle to my office, is a far distance, I urge the Federal Government to have an alternative,” he said.

Ado Saleh, a commercial motorcycle operator said the ban would affect many commuters’ source of livelihood, adding that, the motorcycle was major mobility for a lot of Nigerians.

Ibrahim Abubakar, a motorcycle rider said that the proposed ban would lead to an increase in the crime rate as many of the motorcycle riders would join the bandits and also do all manner of illegal businesses to make a living.

Abubakar said that most of the motorcycle riders were men with many wives and children that they need to cater for and have no other business to do.

Bala Muhammad, another resident, however, described the directive as a step in the right direction.

According to him, many lives had been lost to the activities of some criminals, who use motorcycles and tricycles to perpetrate evil.