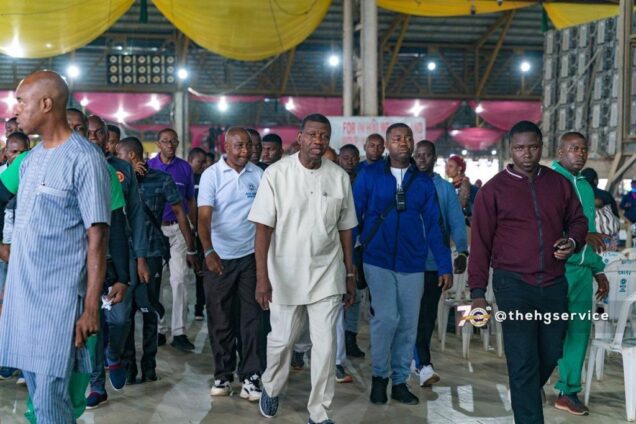 Adeboye and his ministers doing a walkout

When the Redeemed Christian Church of God (RCCG) was founded in Lagos, he was a 10-year-old boy in Ifewara, Osun State. Even though there were early pointers to his spirituality, it perhaps made no sense to him at that age.

Years later, even as a learned university teacher, he nursed an ambition different from God’s purpose for his life. But God has a way of manoeuvring people and events for His purpose.

Today, 80-year-old Pastor Enoch Adejare Adeboye, stripped of all his academic titles, leads the global megachurch, the Redeemed Christian Church of God, spread across 198 countries and territories, to celebrate its 70th anniversary and start its 40th National Annual Convention held at the Redemption Camp, along the Lagos-Ibadan Expressway.

The sprawling Camp is over 50 kilometres away from 9 Willoughby Street Ebute Metta,  where the late Pastor Josiah Akindayomi started the church officially in 1952. It remained there until they were able to acquire a piece of land at the present site of the Headquarters of the church at 1-5 Redemption Way, Ebute-Metta, Lagos (formerly 1a, Cemetery Street). In the early 1970s Pastor Akindayomi, who Pastor Adeboye calls “my Father-in-the-Lord” started to look out for a successor, who had been spiritually revealed to him, but was not at that time a member of the church. He chose Pastor Adeboye, a lecturer in mathematics at the University of Lagos, who joined the church in 1973.

“We have Double Jubilee Celebrations,” Pastor Adeboye announced to the church. “It is going to be from Monday, 8th August to Sunday, 14th August 2022, and the theme for the National Convention is Perfect Jubilee”.

Explaining the theme, he said, Jubilee means certain basic things. “It means Total Restoration. If you have lost anything at all, by Divine Decree in the Year of Jubilee, it must be returned to you. So, a year of Jubilee is also a Year of New Beginning – you are allowed to go and start all over again from where you missed it and then continue life as a free person at the command of God.

“The Year of Jubilee is where no one can hold you back because when God opens a door no man can shut it.”

Providing some highlights of the week-long convention, he said it will be absolutely different from ones held in the past. “There will be a place in the Camp for people to go and sing praises to God from morning to evening; and a place the elderly will sing hymns till they are satisfied.

“Also there will be seven locations dedicated to prayers, where people will go and just pray with nobody leading the prayer sessions. At a pre-event briefing last month, the National Overseer of the church, Pastor Joseph Obayemi said to the mission, jubilee represents a year of harvest of souls into the kingdom of God, deliverance of many from captivity and turning many slaves into kings and priests through the salvation of the Lord Jesus Christ.

He said, ‘‘As a covenant church that was birthed by God’s covenant and still living God’s covenant, we are well aware of our responsibility to the Kingdom of God, our nation of origin and the world at large. That is why our celebration of Jubilee means a lot more than just a celebration of our 70 years of existence.

“ As a mission with a commitment to the development of our nation of origin, Nigeria, Jubilee is a season where we see God liberating our nation from the many challenges it is currently facing – we are confident that indeed, Nigeria will become the delight of all nations.

‘‘As a global church, we affirm our commitment to global peace and the prosperity of nations, families and individuals. We believe that this year of Jubilee will mark a total turnaround for the world economically and in many other ramifications. God will be asserting His authority as the sovereign owner and ruler of all nations.’’

At another briefing, the intercontinental music director of the church,  Pastor Kunle Ajayi, said the music department of the Church was set with an all-around music presentation that includes 70 powerful horns, to symbolize 70 years of the ministry; 300 orchestras, mass choirs; and foreign gospel artistes.

“We want to use this medium to appreciate God in the life of our father-in-the-Lord, our beloved Daddy and General Overseer, Pastor Enoch Adejare Adeboye and our Mama Pastor Folu Adeboye for exemplary leadership and yielding to God in taking the Church to where God has destined it to be.”

As part of the anniversary, the church made donations to hospitals and communities in various parts of the country last month.

And last Friday, Pastor Adeboye led thousands of the church’s ministers, workers and members of the public on a two-hour prayer walk.

A ministers’ conference at the Camp dovetailed into the twin celebration, which begins this morning (Monday).