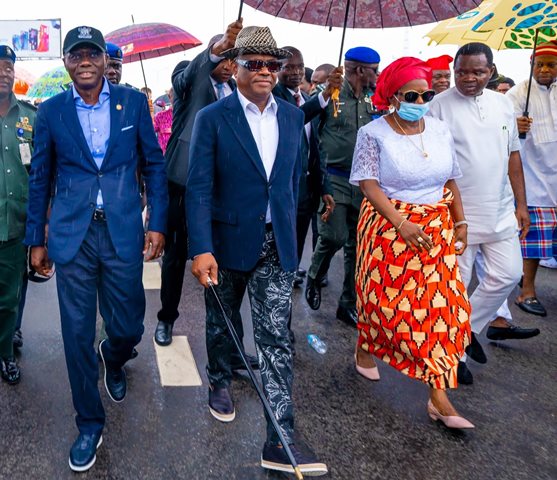 Rivers State Governor, Nyesom Wike has declared that anybody who despises the political capability of the State will be meted with the same treatment.

However, observers believe that Governor may be alluding to the recent frosty political relationship between him and Atiku Abubakar, the Presidential Candidate of Peoples Democratic Party, PDP, who had been reported to have called the bluff of the Governor and allegedly boasted that he could win the Presidential election without Wike and Rivers votes.

Wike made the declaration at the inauguration of the Orochiri -Worukwo (Waterlines junction) Flyover that was performed by the Lagos State governor, Babajide Sanwo-Olu in Port Harcourt on Monday.

The Rivers State governor explained that the dynamics of contemporary politics had made it unpopular to just gift votes away without the assurance of derivable benefit for the people.

“Nobody will use our votes for nothing. Our votes will matter and Rivers State must benefit from anybody that we are going to support.

“Politics now is no longer just vote for somebody, it is about what you will do for the people of Rivers State.”

Wike pointed to how difficult it would be for any conspirators to upset the voting pattern of Rivers State and support for the Peoples Democratic Party, PDP.

The governor reiterated that those who looted the treasury of the State would not be supported to become governor of Rivers State.

“My guest from Lagos State, let nobody tell you story that anybody will come here to win as Governor of Rivers State. It will not happen.

“Those who looted the treasury of the State will not come here to be Governor of Rivers State and I have challenged them.

Wike also berated Mr. Yemi Adebowale over his ThisDay publication in which he peddled misinformation in his ‘RingTrue’ column article titled, ” Wike, a Governor Possessed By Spirit of Flyovers.”

The governor noted the obvious unhappy mindset of the writer for his dislikes for development and hatred for Rivers people who are happy with the ongoing development strides of his administration.

“First of all, let me state, if there is one State that pays salary regularly, it is Rivers State. Let me also state, every month we pay pensioners. Let me also state since we have been paying gratuity, have you been hearing anybody talking on radio?”

Wike also challenged those who are envious of his development strides to rather show what capacity they have by executing projects and invite renown persons to inaugurate them.

He explained that the invitation of the Lagos State governor was not the first time persons, as other political parties were invited to inaugurate projects in Rivers State.

He pointed to the overall benefits such invitations had on governance because it served as peer review for them.

The governor of Lagos State, Babajide Olusola Sanwo-Olu, who inaugurated the Orochiri-Worokwu (Waterlines) Flyover, commended Governor Wike for his strong commitment to the delivery of physical infrastructure in Rivers State.

“I would like to specially commend my brother, Governor Wike, for his strong commitment to the delivery of physical infrastructure in Rivers State, a commitment that has been recognized by all and sundry, and which has earned him the appellation of “Mr. Projects” within and outside Rivers State.”

Sanwo-Olu said though himself and governor Wike belonged to different political persuasions, the invitation extended to him sent a very strong message that politicians and political leaders, could come together across political and ideological divides, for the good of the people.

“There is also a strong message being made today about expanding our capacity to play politics without bitterness. This symbolic gesture by my friend and brother is one that should become standard practice across Nigeria.

“There is also a lot that we can learn from one another, and experience that we can translate from one part of the country to the other.”

Governor Sanwo-Olu further added: “Ultimately, we are all in governance to touch the lives of the people for good; to deliver to them the dividends of democracy. There is no doubt that Governor Wike has spent his last seven years focused on this, just as we have similarly been doing in Lagos.”

Providing the description of the project, the Rivers State Commissioner for Works, Dakorinama George-Kelly said the project has been completed on schedule with specified quality.

“The project has an overall length of 840 meters and overall cross sectional width of 17.6meters, 7.3 meters on each lane. It has 1 meter walkway on both sides, and 2 meter of media. We have a total of asphaltic pavement area of 29000 square meters.

In his speech, Regional Manager of Julius Berger Nigeria PLC, Juergen Fischer, noted that history had been made with the opening for public use the 7th Flyover awarded to them for construction.

He thanked Governor Wike for the trust reposed in Julius Berger Nigeria PLC to handle such huge projects for the State Government.