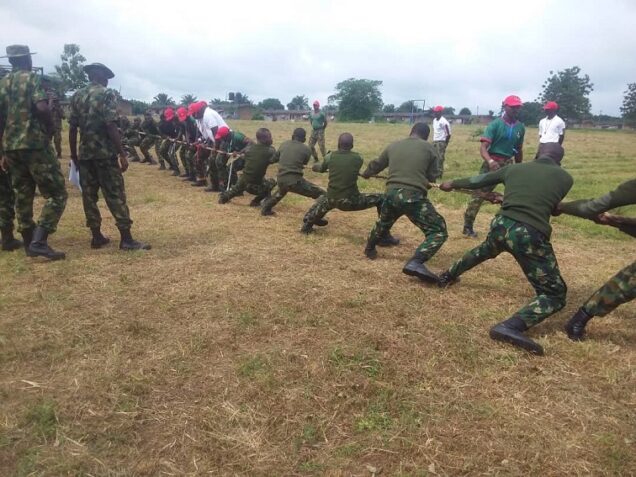 Officers within Major and 2nd Lieutenant rank brackets are currently competing in the annual Inter-Brigade combat proficiency competition of the 2 Division, Nigerian Army.

The event which is holding at the at the Ekehuan Cantonment, Benin City, Edo State, will see the five formations under Division competing in various activities during the four-day exercise.

The activities to be competed for are drills, combat swimming, map reading, weapon/shooting as well as physical fitness.

The General Officer Commanding (GOC), 2 Division, Maj.-Gen. Gold Chibuisi, in his opening remarks, said that the competition was in line with the Army Headquarters training directive for the year.

Chibusi who was represented by the Commander, 4 Brigade, Brig.-Gen. Sani Abdullahi, noted that the event is aimed at improving the standard of battle readiness, physical fitness, strength professionalism and developing spirit of comradeship among the cadre of troops in a joint environment.

He added that the goals and objectives were as pertinent to repositioning the Nigerian Army to better discharge its responsibilities.

He urged the participants to prepare themselves to be challenged, inspired and exhibit the spirit of sportsmanship in order to attain the highest standard of professionalism.

Chibuisi said this was to achieve the Chief of Army Staff’s vision of “A Professional Nigerian Army Ready to Accomplish Assigned Missions within a Joint Environment in Defence of Nigeria”.

According to him, the competition “is designed to improve the leadership qualities of junior commanders, their initiatives and prepare them for higher responsibilities in a joint environment.”

“The competition could not have come at a better time when our dear nation was in need of quality leadership in the military.”

He added: “It is our duty to collectively and patriotically see ourselves as vanguard for the enthronement of ideas that will elicit nation building; and this type of competition is one of such ideas, as our contributions to nation building is invaluable.”

Earlier in his opening remarks, the Commander 4 Brigade, Brig.-Gen. Sani Abdullahi, said that “an Army is only as strong as the training it provides its personnel in the discharge of its roles.

Abdullah who was represented by the Brigade Chief of Staff, Col. W. Diriya, noted that it was against this backdrop that exercise and competition of this nature were enshrined in the training calendar of the Nigerian Army.

He noted that the essence of the competition was to better position troops to meet contemporary challenges and enhance human development capacity, adding that this was in tandem with the Chisf of Army staff’s vision.