Journalists urged to use technological innovations to counter fake news 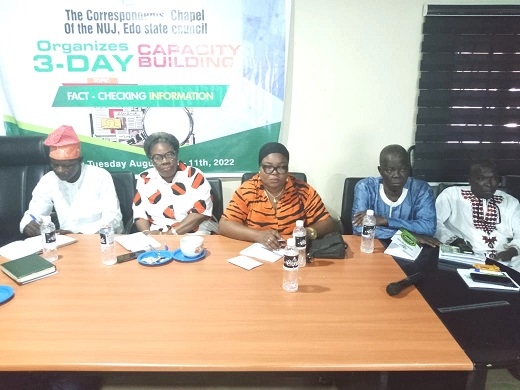 Chairman of Edo State Correspondents' Chapel of Nigeria Union of Journalists (NUJ), Nefishetu Yakubu (m) and some other members at the opening ceremony of a three-day capacity-building on Fact-Checking, organized for members of the Chapel.

Journalists have been advised to take advantage of technological innovations to unravel the truth behind some controversial issues in the Nigeria’s political space so as not to fall prey to fake news.

Chairman of Edo State Correspondents’ Chapel of Nigeria Union of Journalists (NUJ), Nefishetu Yakubu, gave the advise Tuesday morning, at the opening ceremony of a three-day capacity-building on Fact-Checking, organized for members of the Chapel.

Yakubu, in her welcome address, noted that opportunities now abound in technological innovations that could be used to verify and counter fake news, especially during electoral process.

According to her, “In this era of misinformation, it is the intention of the Chapel executives to build the capacity of members on how to deploy technologies to counter fake news that are more pervasive particularly on our social media than ever.

“There is no doubt that opportunities are now abound in technological innovations, hence these can be used to verify and counter fake news, during electoral process.

“Studies have shown that in recent time, technologies have helped to unravel the truth behind some controversial issues in the Nigeria’s political space.”

The Chapel Chairman made reference to a recent news report about the purported two months extension of the Continuous Voters Registration (CVR) exercise by the Independent National Electoral Commission (INEC), which made rounds in the major newspapers, including platforms that have built their reputation and credibility over the years.

“The report was, however, later found to be untrue,” she stated.

Going further, Yakubu said: “Unfortunately, no matter how close it is and how “credible” the platform that reported it is, as far as it’s untrue, its tagged as fake news.

“Election periods are usually engulfed with fake and unconfirmed news reports, which have the tendency of jeopardising the processes

“These have continued to exacerbate mutual distrust amongst electoral stakeholders in Nigeria, media inclusive.

“Ahead of the 2023 general elections, it has become necessary to arm journalists with Fact-checking tools to expose a series of misleading false information, which may be doctored to misinform the public

“Distinguished colleagues, as we represent our respective reputable organisations here, we need to master the art of using technology to counter fake news, especially before, during and after the 2023 election period.

“We expect that at the end of this training, journalists will begin to take additional steps to verify the veracity of information at their disposal, using the technologies that we are about to be exposed to today.

“We carefully selected a fact-checking guru as resource person, in person of Mr. Dare Akogun, who is 2021 fellow of Dubawa Fack-Checking.”

She therefore urged members of the Chapel to take the advantage of the training to be good ambassadors of their various organizations and also help to counter disinformation/misinformation where necessary, for the good of the public.