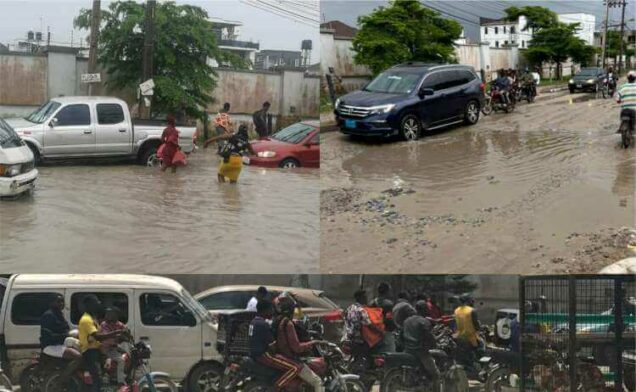 Residents and road users have continued to decry the deplorable condition of Orchid Road, Lekki, and the menace caused by commercial motorcyclists aka Okada riders.

On the bad road condition, the residents described the 6.5 km road as the worst in the ‘New Lagos’.

Meanwhile, the residents noted that it had written the immediate-past government under Mr. Akinwunmi Ambode, but nothing was done, “not even a palliative or rehabilitation work took place.”

However, the community appealed to the state government to urgently rehabilitate the road to alleviate the suffering of the residents of the area.

It added that the urgent rehabilitation of the roads would save lives and reduce the untold hardship being experienced by people in the area, and further create an enabling environment for commercial activities to boom.

According to the residents, “We reached out to the immediate-past administration of Lagos State, but nothing was done. Not even palliative or rehabilitation work took place.

“With the present administration in office, we represented our case backed with pictorial evidence of the deplorable state of the road, but treatment received was exactly the same.

“Later, we were informally informed by the honourable member representing Eti-Osa Constituency 1 in the Lagos State House of Assembly, Hon. Noheem Adams that the road had been included in the budget for 2022 without any formal communication to the association in this regard.

“It’s painful to note that the recent downpour in the state completely cut the community off the major highway, leaving us in the lurch with the road not motorable.

“It’s pertinent to point out that Orchid Road is a major link to Lafiaji, Ogombo, and Abraham Adesanya. As a matter of fact, if this 6.5 km stretch gets the desired attention, it would ease the traffic pressure on the major highway especially the bottleneck created by the ongoing road/bridge construction around VGC as this would be a major outlet for the traffic from Sangotedo and its environs.

“The absence of a constructive response from the state government and all its representatives at different levels necessitated our move as a community to task the residents, business owners, and developers to mobilize a palliative initiative on the road.

“In truth, this has been extremely stressful financially on the residents and business owners.

“To this end, we are appealing to the Lagos State government under the leadership of His Excellency, Babajide Sanwoolu, to come to the aid of residents and give us a befitting road on Orchid Road. It’s a 6.5 km road. This is an appeal for urgent intervention.

“We have a huge population of taxpayers and land use charge payers in this community; therefore, we deserve to commute without stress.

“The economy is inflicting a lot of pain on the citizens already, plying a bad road to work impacts on life mortality rate and destroys the cars of the residents, thereby increasing the financial burden.”

In another development, the residents have also cried out over the activities of commercial motorcyclists (okada riders) in the area, saying this was causing them more harm than good.

This is coming despite the total ban placed on okada by the Lagos State government in some parts of the state, including Eti-Osa Local Council Development Area (LCDA) where Orchid Road is located.

Furthermore, the residents called on Sanwo-Olu to save the community from the menace by sustaining the ongoing clampdown on commercial motorcycle operators in the area.

According to the association, “Orchid Road is under siege by okada riders! There was a near fracas incident recently involving one of the riders and a female resident whose side mirror was knocked off”.

“She was eventually swarmed by over 20 okada riders demanding she pays them N30,000, or they’d burn her car.

“This is not the first time residents have been terrorized by motorcycle riders on Orchid Road. Indeed, okada has been an environmental nuisance and many residents have had their fair share of their sheer recklessness.

“Our wives, daughters, and sisters are being harassed daily on this road. Lagos State government should come to our aid. This is beyond us as an association, please.”