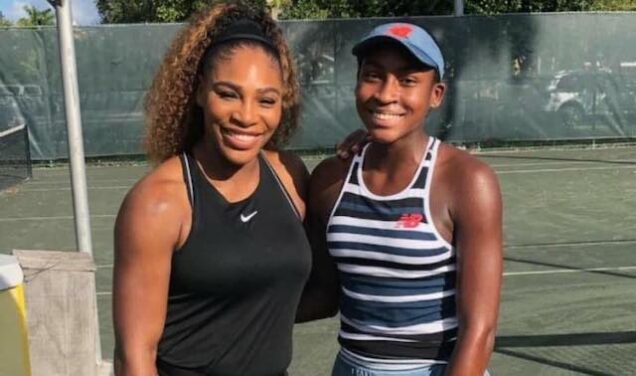 American teenager Coco Gauff has credited Serena Williams and her family for paving the way for the next generation of Black female tennis players.

Williams, 40, told Vogue that “the countdown has begun” towards her retirement, prompting an outpouring of praise for the 23-time Grand Slam champion for her groundbreaking impact on the sport. read more

“I grew up watching her. That’s the reason why I play tennis,” Gauff told reporters after her first-round victory at the Canadian Open in Toronto on Tuesday.

“Tennis being a predominantly white sport it definitely helped a lot. Because I saw somebody who looked like me dominating the game. It made me believe that I could dominate too.”

Gauff said the entire Williams family – including older sister and seven-time major winner Venus and their father Richard who first put a racket in their hands – also served as an inspiration.

“Mr Williams and all that he’s done for both of them inspired my dad to continue to coach me and help me. Even though he had not really much tennis experience. But he said, ‘If Mr Williams can do it, then I can’,” added Gauff.

The 18-year-old said she still wanted a crack at her idol before she retires, which is expected to come after the U.S. Open that kicks off later this month in New York.

“I have always wanted to play her. So I’m hoping that my draw in Cincinnati or the U.S. Open or even here (Toronto) can work out so we can play each other because that’s just one of my goals,” Gauff said.