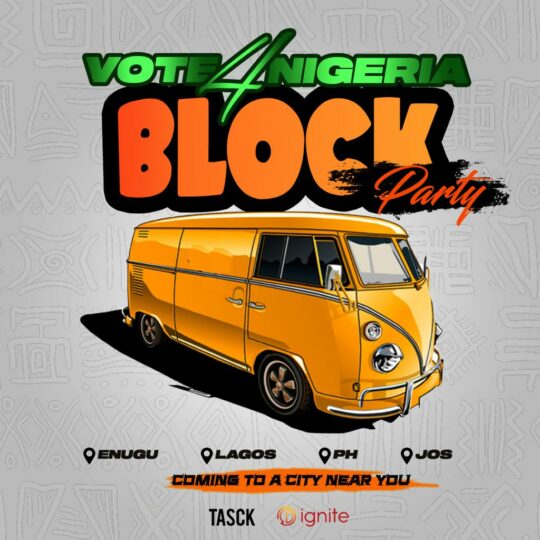 In preparation for the upcoming 2023 elections, TASCK Creative has launched the #Vote4Nigeria campaign, which will bring together creative influences within the industry to drive for increased youth participation in the elections.

TASCK has announced that the 6- month campaign will consist of multiple events to sensitize citizens to pick up their PVCs, pay active attention to candidates running for positions and to show up at the polls in 2023. The campaign will include a four city block party, concerts, skit challenges, rap battles and other creative expressions. It is a continuation of the ongoing #iregistered campaign by TASCK which started in February 2022, and has brought together influencers to show their PVC’s and encourage more Nigerians to go out and get theirs.

The company understands the impact creatives have on young Nigerians and is using this understanding to create social change and reduce voters apathy. While expressing the importance of the event, the community director of TASCK, Jennifer Agaldo said:

“There is no better time to do this than now. Young Nigerians have shown that they are no longer willing to accept bad governance but we need to match our zeal with action, realizing that voting is only the way to change the status quo and recognising that we have the numbers and the power to do so; and who better to lead the charge than the artists/creatives they know and love?”

Also speaking on the campaign, the CEO of TASCK, Jude ‘MI’ Abaga said: “This campaign is a call for young people who are of appropriate voting age in Nigeria to come out and vote. Our goal is to mobilize young people to vote in the 2023 elections, and we are doing that with music.”

The block parties which will be held in four different cities (Enugu, Lagos, Jos & Port-Harcourt) and will debut on the 27th of August in Enugu will bring together the creative community and music lovers in sessions open to everyone who has registered to vote.

The highlight of the campaign will be the #Vote4Nigeria concert which will hold on the 1st October 2022, which will bring both A-list and upcoming creatives together to put on a show to celebrate Independence day, sensitize citizens on the need to collect their PVC’s, their role and their power and encouraging them to turn up enmasse in the 2023 elections.

TASCK continues to be a voice for social change within the entertainment industry and enables creatives to be the key in amplifying causes that matter to young Nigerians. Facilitating important conversations and networking with socially responsible creative influencers, the company is building a strong community of changemakers within the creative ecosystem.