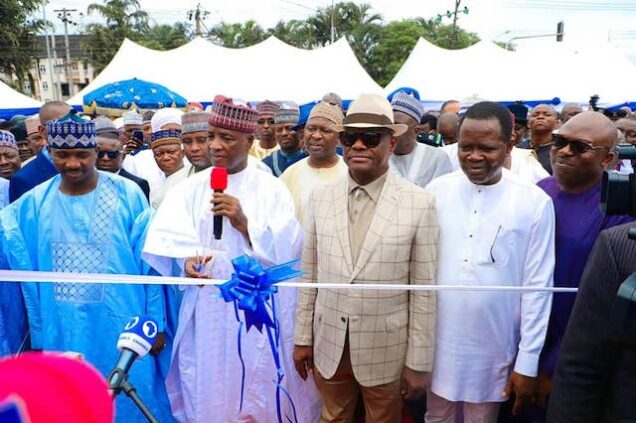 Senator Wamakko, with Gov. Wike at the commissioning of road in Rivers

Rivers State governor, Nyesom Ezenwo Wike has fulfilled a promise he made to a community in the state, hosts of the new Ogbunuabali -Eastern Bypass Road, by gifting the people N2billion.

Governor Wike thanked the people of Ogbunuabali for their cooperation while the project lasted even though they initially rejected it.

He used the occasion to lift the ban on youths activities in the community.

Senator Wamakko said any well meaning government should serve to satisfy the yearnings and aspirations of the governed. He noted that as a talk and do governor, Wike has done adequately well for his people.

On his part, Rivers State Commissioner for Works, Dakorinama George-Kelly said the Ogbunuabali -Eastern Bypass Road was a single carriage way of 7.3meters wide but it was totally scarified and completely rebuilt.

Today, he noted, the 2.19km long road which has been dualised, has 4.38m width on each side of the lane, 6.50 median on the Ogbunuabali axis, 1.5meters median on the Eastern By-pass axis and has 4.38km of drainage length.

In his address, the South-South Regional Manager of Julius Berger Nigeria PLC, Juergen Fischer, said they started with the first project of the Wike’s administration, operation zero potholes which culminated into the ongoing urban renewal programme.

According to him, they are delighted working with governor Wike to achieve his development dreams for Rivers and thanked him for the opportunity.