2023: Reports that I wrote Tinubu to give Obi a chance mischievous - Akufo-Addo 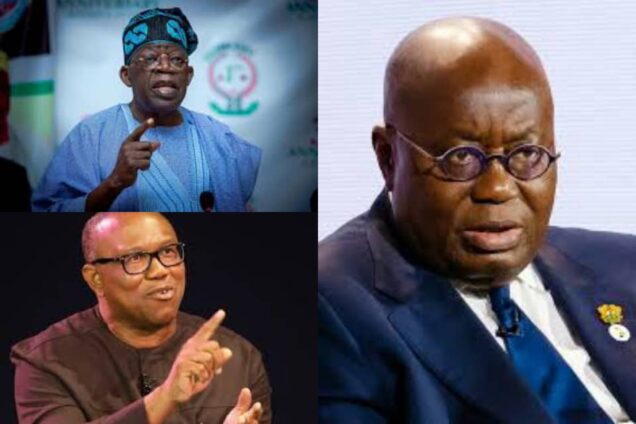 Reports suggested that Akufo-Addo wrote Tinubu to give Obi a chance to be president while he should seek treatment for his health.

A disturbed Ghana’s president, in series of tweets debunked the reports, saying he never did.

He described the reports as completely false and mischievous as there was no iota of truth in the report.

He wrote: “My attention has been drawn to a disturbing post making the rounds on social media, where it is alleged I have written to the 2023 presidential candidate of the APC, Asiwaju Bola Tinubu, to “give Peter Obi a chance and seek treatment for his health”.

“This is completely false and mischievous, with no iota of truth whatsoever in it.

“I have written no such letter to the APC leader, and it will not occur to me to do so. Ghana and Nigeria boast of decades of cordial, strong and brotherly relations, and I am not going to be the one to interfere in the internal affairs and politics of Nigeria.”

Peter Obi’s supporters have been caught several times demonising Tinubu and Atiku Abubakar in order to gain undue advantage by thriving on falsehood.