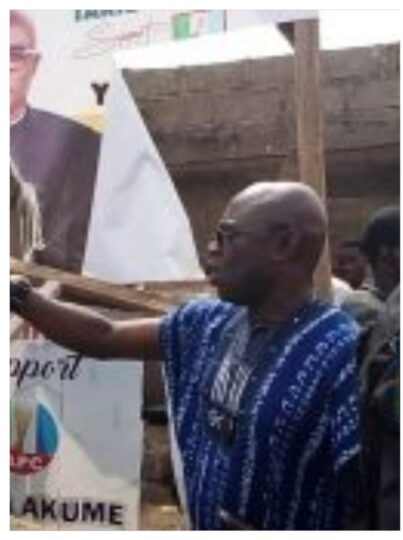 The governorship candidate of the All Progressives Congress (APC) in Benue, Rev. Fr Hyacinth Alia has expressed concern over the destruction of his campaign office by thugs in Gboko.

He however called for brotherliness and issue-driven campaigns in the state.

Alia said this in a statement issued by his media aide, Mr Isaac Uzaan on Tuesday in Abuja.

He urged people of the state to focus on new ideas that would transform Benue and make life better for the people.

The governorship candidate who was in Gboko to assess the level of damage to the campaign office, said people should not resort to extremism in their political beliefs.

“We only have differences in ideologies and our differences must not take us to extremism.

“Let’s do politics with a difference. We still share the same blood and we are still making the struggle for the betterment of the state.

“This should not ever be permitted at all. We are not supposed to do politics of calumny, politics of destruction,” he added.

Alia called on stakeholders and elders across party lines to be progressive minded and engage the youths in healthy activities that will significantly benefit their lives and that of people around them.

He appealed to the youth to shun any politician who will use them for destructive purposes.

“It is my appeal to the youth to be more reasonable, more calculative and more thoughtful about their own lives, and what they can contribute to the state and not what they can destroy in the state,” he added.

The APC governorship candidate said his focus was to address the myriad of challenges in the state.

“I’m a bridge builder. I’m coming as someone who is going to make a difference. This is politics of yesterday, we cannot continue like this.

“We need to do something that can put us in a new pedestal. We need to be going ahead. We are a new generation, new thinking, new ideologies and we must have new plans in place,” Alia said.

Earlier, the state APC Woman Leader, Mrs Esther Inenger, who donated the campaign office, said the thugs destroyed billboards and carted away chairs, tables and some valuables from the office.(NAN)(www.nannews.ng)