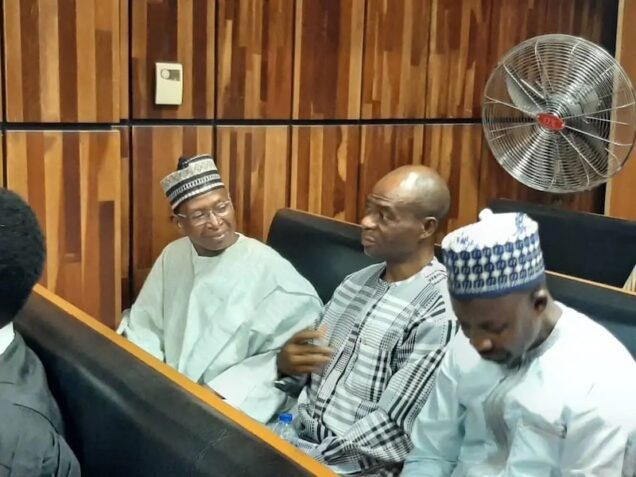 Ex-AGF Ahmed Idris, left, with other accused in court

An FCT High Court on Wednesday adjourned until 4 Oct the trial of suspended Accountant-General of the Federation, Ahmed Idris, and three others for alleged N109.5 billion fraud.

The Economic and Financial Crimes Commission (EFCC) charged the defendants with 14 counts of alleged misappropriation of N109.5 billion.

Justice O. Adeyemi Ajayi fixed the date after listening to the submissions of all the counsel in the matter.

The counsel to Idris, Chief Godwin Uche ,SAN, told the court that he and other defendants’ counsel had not been able to meet with their clients yet on the statements all of them made at the EFCC office.

Ajayi granted their prayer and adjourned until Oct 4 for further hearing.

Earlier, the judge revoked Usman’s the bail over his failure to arrive in court on time.

His counsel Ibrahim Ishaku, SAN, though notified the court that his client was held up in a gridlock.

The Prosecution Counsel, Mr Rotimi Jacobs, SAN however, told the court the defendants sent someone to the EFCC asking for a plea bargain.

The EFCC alleged that between February and December, 2021 Idris accepted gratification from Akindele, to accelerate the payment of 13 per cent derivation to the nine oil producing Sates, through the office of the Accountant General of the Federation.

It also alleged that N84. 3 billion was converted from the federal government’s account by the former accountant general and second defendant between February and November 2021.

The EFCC said the offence contravenes the provisions of sections 155 and 315 of the Penal Code Act Cap 532 Laws of the Federation of Nigeria 1990.