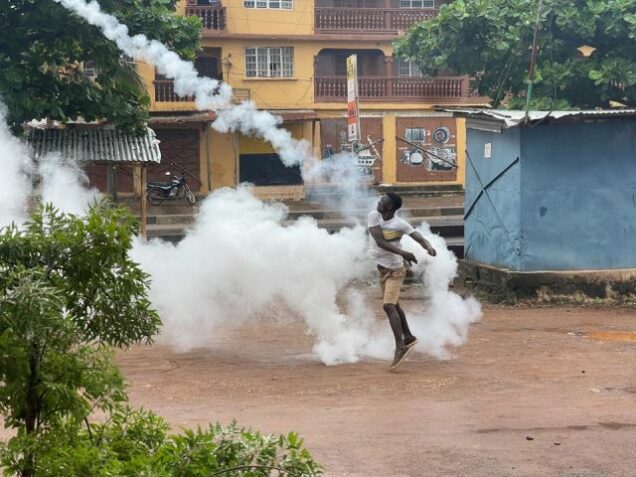 A protesters three a teargas canister at the police. Photo: Reuters

Many stayed indoor on Thursday to avert being caught in the violent protests, as citizens took to the streets to express their anger at the high cost of living in the small West African country.

The unrest is highly unusual for Sierra Leone, especially in the West African country’s capital Freetown. A few people have been killed in isolated protests in other cities in recent years, Reuters reports.

The protests began on Wednesday as anti-government protesters took to the street over failure government to stem the hardship in the country.

The agency quoted Sulaiman Turay, 19, as saying that he marched briefly with others before police started firing teargas and said he later he saw demonstrators getting shot at from his porch.

Police sources said at least five cops and 21 civilians were killed during the unrest.

Long held in check, citizens’ frustrations have been exacerbated by rising prices for basic goods in a country where, according to the World Bank, more than half the population of around 8 million live below the poverty line.

At least 13 civilians were shot dead in Freetown, said staff at the city’s main mortuary. Hospital sources said that four civilians were killed in Kamakwie and another four in Makeni.