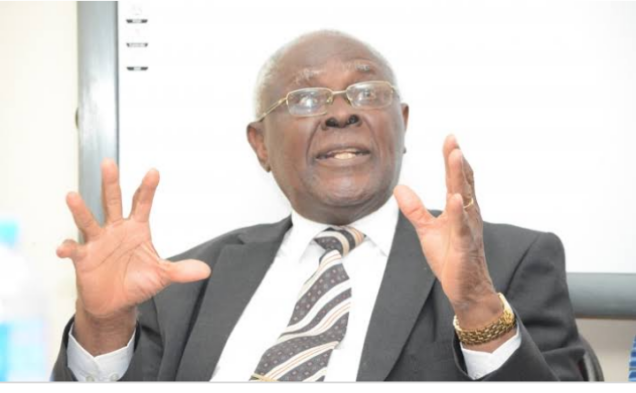 I have known Prof for as long as I have known myself! He and my father, Bola Ige were classmates at Ibadan Grammar School and University College, Ibadan, now University of Ibadan. He and my dad grew up in the North and would speak Hausa, when they didn’t want others to hear their conversation. They both married lawyers, both pioneer female lawyers, who later became Judges.

I am the first of my parents’ children and they took our upbringing very seriously. When I was to be baptised, being a girl, I only had one Godfather and my parents chose a Godfearing Christian who shared the same values as them. They chose the best person for me, Professor Akin Mabogunje. He took his Godfather role very seriously and as I prepared for my Confirmation in 1973, he explained the meaning of the Christian milestone-that I was then old enough to confirm the vows he had taken with my parents at my baptism, that jointly, they would raise me in the ways of the Lord Jesus Christ.

I remember he gave me a white Zondervan Bible for my Confirmation, autographed in his beautiful handwriting.
When I was 21, and I had a thanksgiving service he and his wife, Hon. Justice Titilola Mabogunje( my mum’s lookalike), gave me my first Omega wristwatch- it was a Seamaster edition.

Before I got married, I took my then Fiance, Gbenro Adegbola to meet him and of course, he gave his seal of approval. He gave me a handsome cash gift for my wedding.

Prof and Justice Mabogunje have been at every milestone of my life. They were there at my wedding, 40th, 50th, 55th birthdays. When I shared my vision of running a private secondary school, The Vale College, with him, he was most supportive. Hon. Justice Titilola Mabogunje was one of the Founders’ Day Lecturers in the early years of my school. They both attended nearly every Founders’ Day of the college. In 2020, he and his beautiful wife were given the award of PILLARS OF THE VALE for their support and contribution to the vision of the school. When I was building my College Hall, they gave the biggest donation. I am grateful to them for their generosity.

In 1995 when I moved to the same neighborhood, we became even closer in proximity. When my mum was transferred to Benin and Kaduna, she was happy that I and my family were in good hands, with the Mabogunjes, Ojos and Ade-Ajayis within walking distance.

However in 2003, when I lost both my parents within the space of 16 months, and I was totally emotionally shattered and devastated, my Godfather, now became truly ‘in loco parentis’, our relationship became even stronger. He helped us with the Order of Service for my mum’s service of songs and funeral.
Since his house was within walking distance, I would often, just stroll to spend time with him, sharing both the high and lows of my life. He would cheer and encourage me on.

He and his wife, like my parents, are my role- models in marriage- two professionals united in love yet giving each other space to grow and flourish, without taking the shine off one another. They would both take walks round the neighborhood right till their 80s. I was happy to be present at their 60th wedding anniversary, surrounded by their children, grandchildren and great- grandchildren.
Prof was the epitome of a complete gentleman. Very calm, polite and soft-spoken. He was extremely clever yet not arrogant. He was a man of peace and distinction- very measured, articulate, meticulous and detailed in his dressing as well as his calligraphy.

One of the attributes I love most about him, is his love for family and loyalty to friends. He loved and supported his beautiful wife, Hon Justice Mabogunje. I thank her for the way she looked after him especially in the past one and a half years. Thank you mum, for your unconditional love and care for dad. May the Lord bless and keep you, grant you good health and long life IJN. Amen. I pray that the Holy Spirit the Comforter will suffuse you with His presence and abide with you always IJN. Amen.
Mum and Dad are blessed with such wonderful children- how many families have 2 Professors as children, including Professor Sade Ogunsola, the first female Acting Vice-Chancellor of University of Lagos. He was really blessed and highly favored- Father of Professors, literally and
metaphorically! Indeed God gave him a great measure of His grace.

His children- Segun and Sade Ogunsola, Seun and Toki Mabogunje, Gboyega and Nirvana Mabogunje, Femi and Bimpe Oye and Sola and Sinmi Mabogunje gave him the very best care, medically and emotionally. Indeed Gboyega spent two months at his bedside. What a great family full of sacrificial love for one another. You are all very worthy children and my prayer is that you will all live long in good health and that your children will care and pamper you just as you did for your parents. Amen.

I am glad I went to visit him a few times in Lagos especially in June, when Bimpe told me the end was near. I am glad I didn’t procrastinate. Funke Aboyade SAN and I were there that day and we both had a chance to say a very emotional goodbye. I stroked his brow and hair and we sang hymns together. I thank God for his exemplary life and the legacy of love and service that he has left his family and all of us his loved ones. I will not mourn but celebrate the life of my darling Godfather and pray that I may live an impactful life and leave my footprints in the sand of life, just like him. Amen

Prof died peacefully in his sleep, quietly and without any pain, just as he lived. A true child of God has returned to his Father who he loved and served all his life. He loved hymns and spiritual songs and would sing lustily in his sonorous voice, knowing the lyrics by heart. To say I would miss him, is an understatement- When my dad died, I told myself ‘Baba ku, baba ku’, now that my Godfather has gone to meet my dad on the other side, all I have left and will always have, is my Almighty Father, the Lord Jesus Christ. Alleluia!

I bless God for the past 20 years that I had Prof as a strong father figure in my life. He saw me flourish and saw both my children get married – he was very present at my daughter’s marriage introduction. I cannot thank God enough for sparing his life for the birth of my first two grandchildren, with my granddaughter being born the day before his 89th birthday .

We Yorubas believe that our dear departed ones meet in heaven, I am sure you and your friends- my parents, would have met by now and you can tell them how great a support you have been to me and mine. Rest In Peace my Outstanding Irreplaceable Godfather, I love you very much but I know Jesus loves you more. You lived well, loved much and served God, family, nation and the entire world, to the best of your ability. You gave your all to humanity, impacting and touching millions of lives, directly and indirectly. We are assured that you are in the bosom of our Lord Jesus Christ and so, I bid you Goodnight and see you on the Resurrection morning, when we shall meet to part no more. May the angels carry you and may light perpetual shine upon you. Amen.

Goodnight my one and only Godfather, an icon and exceptional academic and statesman. I will always love you and all that you loved! Rest In Peace my Godfather, like none other!

-Mrs Funso Adegbola (née Ige) is the proprietress of The Vale College, Ibadan.