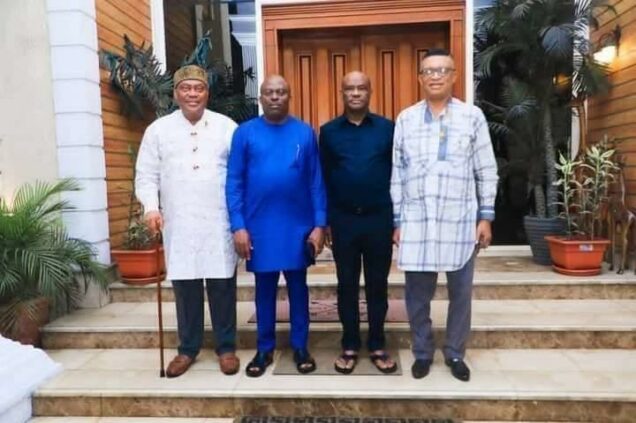 There are rumors that Chris Finebone, the spokesperson of All Progressives Congress, APC in Rivers may have dumped the party for the Peoples Democratic Party, PDP.

The rumours that Finebone has dumped APC began to spread on Thursday evening after a photo emerged showing him standing with Governor Wike, PDP governorship candidate, Siminalayi Fubara, and a former APC Chairman, Davies Ibiamu-Ikanya.

The photograph later began trending on the social media.

The PDP governorship candidate and Finebone are from the same community in Opobo Nkoro local government area of Rivers state.

The rumours of the defection of Finebone to PDP has elicited Social Media buzz because he was thorn-in- flesh of Governor Nyesom Wike and his administration as the spokesperson of APC.

He is also a key political ally of the former Minister of Transportation, Chibuike Rotimi Amaechi and founding member of APC.

Finebone, was quoted to have said that ‘Fubara is his brother It is what it is’ and that he needs to support him during the meeting with Wike.

Efforts to reach Chris Finebone and leadership of the APC in Rivers State to confirm the defection have not been successful.
When our Correspondent called his phone number it was switched off.

But as expected, the rumoured defection of Finebone has elicited jubilation in PDP.

Our Correspondent reports that since the emergence of Fubara as the PDP governorship candidate, indigenes of Opobo in other political parties have been under intense pressure to decamp to his party to support him to win in 2023.