Anambra's Eberechukwu excretes 77 pellets of cocaine on arrival from Ethiopia 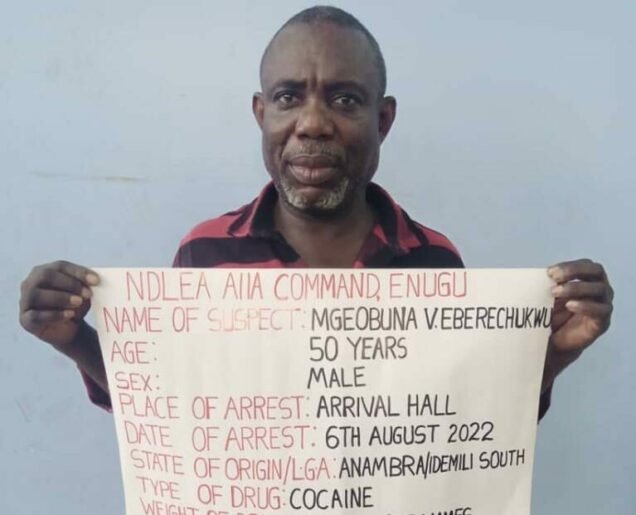 Mgbeobuna Victor Eberechukwu, 50, from Anambra State has excreted 77 pellets of cocaine after he was arrested at the Akanu Ibiam International Airport, Enugu on arrival from Ethiopia.

NDLEA spokesman, Femi Babafemi, in a statement on Sunday said he was arrested on Saturday, 6 August following his arrival from Addis Ababa, Ethiopia onboard an Ethiopian airline flight.

“The suspect, who hails from Idemili South LGA, Anambra State passed out the 77 wraps of the illicit drug in eight excretions spanning four days,” he said.

Babafemi added that in Kaduna, three suspects: Saifullahi Sani, Salisu Nafi’u and Abdulrazaq Mamman, were arrested in Zaria on Thursday, on 11 August with 1,112,350 tablets of Tramadol (225mg and 100mg) weighing 38.3kg.

He said in Kano, a female drug dealer, Saratu Abdullahi, 28, from Wurno council area of the state was nabbed at Hotoro with 541 blocks of cannabis weighing 245kg.

“In Lagos, NDLEA operatives recovered a total of 1,773.25kg cannabis sativa at Ebutte-Meta and Akala in Mushin areas of the state in separate raid operations between 9th and 10th August.

“At the Tincan seaport in Lagos, 86 parcels of cannabis indica (Colorado) weighing 43kg were recovered from a 40ft container during a joint examination with Customs and other security agencies.

“The illegal consignment seized on Friday 12th Aug came from Toronto via Montreal, Canada and concealed in two drums inside a Mercedes Benz SUV in the container,” Babafemi stated.