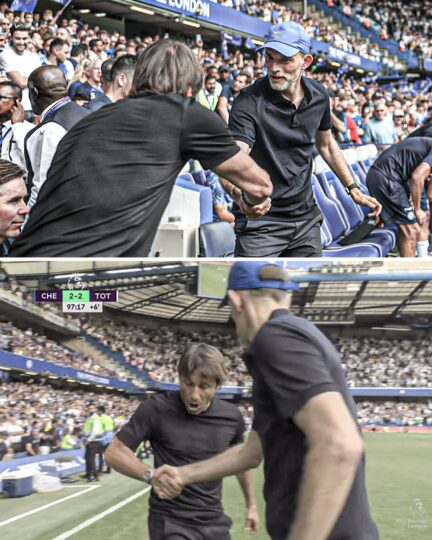 Antonio Conte and Thomas Tuchel went for each other’s jugular at full time as Tottenham and Chelsea played a 2-2 draw at Stamford Bridge.

Harry Kane scored a dramatic 96th-minute equalizer to give Tottenham a point in an ill-tempered London derby against Chelsea.

Antonio Conte had twice looked set to finish empty-handed on his Stamford Bridge return, with Kalidou Koulibaly opening the scoring with a sumptuous volley on his home debut for Chelsea early on.

Pierre-Emile Hojbjerg leveled with a long-range strike in the second half, but Chelsea again looked to be on course for the win when Reece James side-footed home after racing onto Raheem Sterling’s pass.

But Kane was on hand to head home from a late corner and spark wild celebrations from Conte, who was promptly sent off amid a touchline clash as Spurs claimed a potentially vital point from a trip to a likely rival for Champions League qualification.

Watch the video from the moment of ill-temper between Conte and Tuchel below;