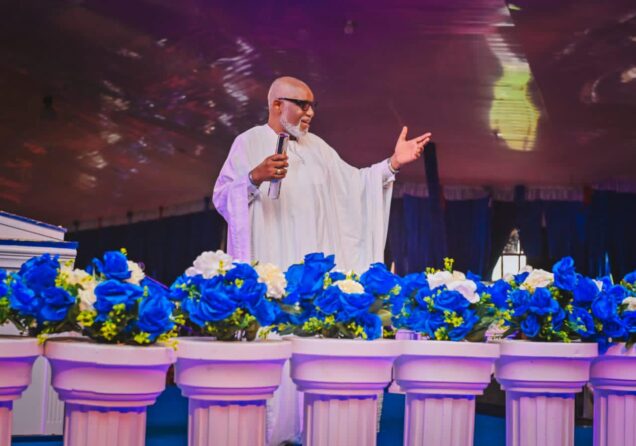 Chairman of the Southern Governors’ Forum and Ondo State Governor, Oluwarotimi Akeredolu, has re-emphasized the need for the people to shun religious division.

Governor Akeredolu urged that Nigerians should not allow religion to bring quarrels among them.

The Governor reiterated his position on Southern Presidency, stressing that the time has come to rotate power to the South in the interest of justice, equity, and fairness.

He spoke on Sunday at the Agape International Church 34th Annual Convention 2022, held in Akure. The theme of the convention is, “This is my Time.”

While pointing out that the people have always lived together in harmony despite their religious differences, Governor Akeredolu gave a practical example of Her Excellency, Omloewa Ahmed, wife of the former Governor of Kwara State who is married to a Muslim.

The Governor said: ”The theme of the convention is, “This is my Time”, that is, ‘Emi Lokan’. So, if you are now saying this is your time, what is the meaning in Yoruba? It is “Emi Lokan”. The choice of the theme, I’m sure it is something that the Lord Almighty put your mind to do so that it will resonate with “this is my Time, Emi loan.’

“We have a very very interesting coincidence here. Today, we have Her Excellency Omolewa, wife of the former Governor of Kwara State here. I have known her to be a true Christian, very true one, leading the altar in her home, in a home where the husband is also a true Muslim. And they are all living together peacefully. That is one example.

“There are so many examples. But I will give one more. There is one of our leaders who is a Muslim and married to a senior Pastor in the Redeemed. We all know Asiwaju Bola Ahmed Tinubu. They all live together. I know in my family that there are Muslims there, and we are not quarreling.

“There are many people here that have both Muslims and Christians as family members and there is no quarrel. Religion should not bring quarrel among us and that is where we stand.

“What we believe and stand by is that since we started this Republic in 1999, we have been rotating power from North to South, and for us, by that rotation, this is the time of South.

“This is our time and nobody is going to take it. ‘Awa lokan’. Wonderful theme for this time. When the theme was chosen, I’m sure nobody was thinking about ‘Emi lokan’ or anything; but it is just by coincidence.

“God has spoken through Agape that this is our time. I thank you Agape.” the Governor added.

On the compulsory installation of CCTV devices in worship centers and other public places, the Governor lauded the church leadership for complying with government directives, saying Agape is security compliant.

Governor Akeredolu also used the occasion to thank God who has made the arrest of attackers of St Francis Catholic Church Owo, possible, saying it is a prayer answered.

He further charged the congregation and all residents of the state to always be security conscious and alert.

“Whatever the government asked you to do, please comply. Have security men at your gates, have your CCTV cameras and check all new faces before allowing them into your churches.” He said.

He said “we will not wait for us to be captured. Nobody can capture us. We are from Ondo State, we are indomitable, we are fighters and we will fight to the last.”

Governor Akeredolu was also celebrated at the convention for his sterling leadership quality.

The General Overseer, Agape International Church, Bishop Felix Adejumo described Governor Akeredolu as the voice of the South West who has been doing a lot to protect not only the poeple of Ondo State but the entire South-West region.

Earlier, the National President of Pentecostal Fellowship of Nigeria (PFN), Bishop Francis Wale-Oke, who delivered his sermon on the theme of the Convention, “This is my Time”, prayed that time has come for the congregation to receive all the good things they have been praying and waiting for.

The convention was also attended by the Deji of Akure Kingdom, Oba Aladetoyinbo Aladelusi, and members of the State Executive Council.