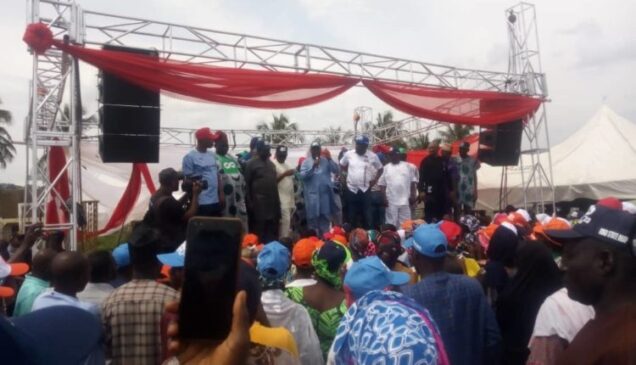 Kogi people at the event to declare support for the APC presidential candidate in the 2023 election, Bola Ahmed Tinubu and his running mate in Okene on Saturday

Kogi people in their numbers trooped out on Saturday to declare support for the All Progressives Congress, APC presidential candidate in the 2023 election,Asiwaju Bola Ahmed Tinubu and Senator Kashim Shettima, his running mate

Coordinator of NCS ’23, Mr. Ibrahim Raji said the APC candidate and his running mate are experienced politicians who possess what is required to move Nigeria forward, adding that his group is determined to mobilise youth and women in the Middle Belt for them.

He called on youths and women to discharge their civic duty by participating in the electoral process. ”We want to encourage the youth to take the foot step of Asiwaju because he started as a youth during NADECO, and became Senator as a youth.

”We need a leader that can come up with a good template to salvage Nigeria, and it is only Asiwaju that can do that, and also think of the masses especially the youths.

National Chairman of SWAGA, Senator Dayo Adeyeye extolled Tinubu for his passion, vision and mission, qualities which he said distinguish him from other candidates in the 2023 Presidential race. He said the APC candidate is poised to deliver good government, adding that the Ajaokuta Steel Company and the solid mineral sub sector will receive special attention under him.

“I urge all of you to join the disciples of Asiwaju and carry his gospel to every nook and cranny of Kogi state. Asiwaju will explore and develop solid minerals.

“Tinubu did well as Lagos State Governor and he will replicate same achievements across the country. He won the APC primary by landslide, and that is what will happen again in 2023 presidential election by the grace of God.

A notable women leader, Mrs Funmilayo Samuel who assured of support from the women demography in the state said she joined the Asiwaju train because of the enviable public service records of the former Lagos State Governor.

Mrs Samuel dispelled the rumour about Asiwaju’s health. “We know that he is healthy. He is also blessed with sound brain which he is ready and willing to use for the progress of Nigeria. Tinubu will not loot our treasury. You will not lose when you deal with him. He is tolerant and considerate to all, Irrespective of religion or tribe. Nigeria will flourish under him.

A lawmaker, Hon Oye Ojo said he knows Asiwaju at close range and could attest to his political, religious and family credentials. “Our women, men and youths will see the difference when Asiwaju comes into government. I’m begging all of you to support Asiwaju so that the good of Nigeria will be in our own time.”

Afrobeat musician Zule Zoo, were among performers at the event.