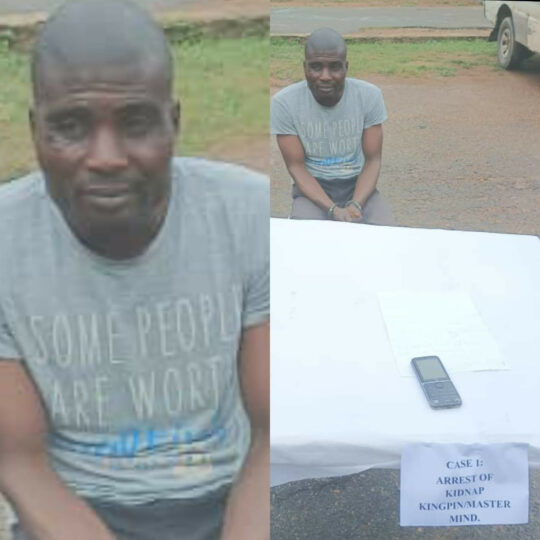 A 37-year-old man, who wrote a threat letter to a private university in Oyo town to kidnap three of its students, has been arrested.

Osifeso explained that the suspect, who wrote the letter to the university on Thursday, threatened to kidnap three of its students if a N10 million ransom was not paid within a stipulated period.

He said the suspect’s mode of operation was to run detailed background checks on an unsuspected victim and then inform them through the writing of his intentions to abduct them unless a stipulated ransom was paid to him.

According to him, on Aug. 11 at about 0800hrs, members of a notorious kidnapping syndicate sent a hand-written note to the management of a private university in Oyo town.

“In the note, they threatened to abduct three of its students should the management fail to pay N10,000,000 within a stipulated period.

“The threat as expected, disrupted academic activities within the university, stirring up panic and uncertainty among the university community,” he said.

The spokesperson said under the euphoria of a presumed successful scheme, the syndicate similarly notified a branch of a new generation bank within Owode area, Oyo, with the intention of invading it later in the week.

He disclosed that the investigation by the police led to the arrest of one of the members whose phone numbers were inscribed on the hand-written notes to the school management and the bank.

Osifeso said that the suspect confirmed that the phone number on the note was his but denied being the author of the document.

He however said that further investigation conducted led to the arrest of the 37-year-old suspect who confessed to being the author of the hand-written notes.

He explained that the first suspect arrested was used as a decoy for the purpose of concealing his direct involvement.

Speaking to journalists, the suspect confirmed being the author of the notes and that his intention was not to kidnap but to threaten the institution.

He added that the letter instructed the institution to pay N10 million to prevent the kidnapped of three of its students.

He said that the letter, which also contained a map of the institution, showed the institution as the target, and warned people living within the vicinity not to intervene when they came for the operation.

The VC said that the institution, frightened by the threat letter, informed the security agencies in the state immediately and thanked God that the action yielded a positive result.