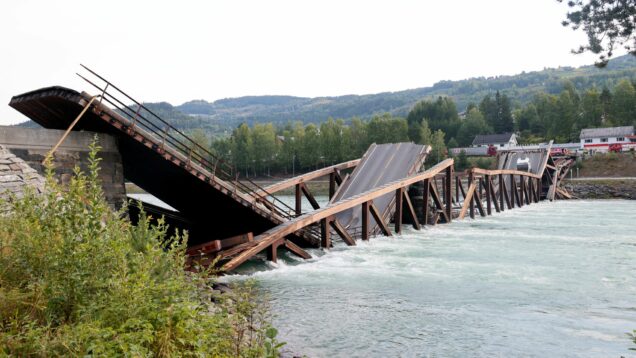 Vehicles fall into river after wooden bridge collapses in Norway

Two vehicles slid into a river after a bridge collapsed north of the Norwegian town of Lillehammer on Monday, triggering a rescue operation.

A car and a truck were partially submerged after the fall of the wooden bridge, some 150 meters long.

A helicopter rescued the truck driver, while the car driver managed to escape from the vehicle, the spokesperson said.

The bridge in the municipality of Øyer, north of Lillehammer, was still relatively new, the spokesperson said, noting he could not yet say what had caused the collapse.

Local Mayor Jon Halvor Midtmageli said the bridge was fairly new, adding that “it is completely destroyed, everything has fallen down.”

The Norwegian Automobile Federation said the bridge was checked in 2021, raising concern about the safety of such bridges.

“We who travel on the roads must be able to trust that the bridges are safe to drive on,” the organization’s spokeswoman Ingunn Handagard said.