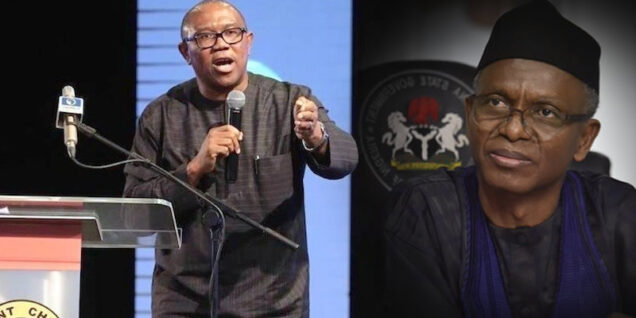 Nasir El-Rufai, the governor of Kaduna, has mocked the supporters of Peter Obi, over their plans to hold a “two-million-man march” for the presidential candidate of the Labour Party.

The governor said the plan will only succeed on Kaduna Twitter and not in Kaduna State.

Supporters of Obi across the country have been holding these marches to show their solidarity with him.

There was a march for the LP presidential candidate in Nasarawa state recently.

However, in a tweet on Monday, el-Rufai who is of the All Progressives Congress (APC) said he hopes Peter Obi’s fans would be able to get two hundred people in the streets of Kaduna for the march.

The governor said they can only get the figure they are projecting by “importing” people from states complying with IPOB’s sit-at-home order every Monday.

“I hope you get Two Hundred persons on the streets, including those ‘imports’ that can’t open their shops on Mondays, and came on overnight bus last night!! I just dey laff, wallahi tallahi!!”

However, El-Rufai’s comment has generated controversy as Peter Obi’s supporters took to his comment section to berate him.

@KelvinIkenga wrote: “This is a state governor in Nigeria being openly tribalistic, & lacking all sense of decorum & finesse.

“Peter Obi’s only crime is being Igbo.

“Next time when Igbos tell u they’re hated, believe them.

“How can this openly tribalistic fellow be fair to all citizens in his state?”

Another popular Obi supporter FS Yusuf wrote: “That you have to respond to this, is a clear indication that you feel super threatened and unsettled.

“This isn’t you disproving or dismissing a fact, this is you yielding to the trepidation that it is PO-ssible

“Import” is a strategy of APC that we won’t be employing. Rest.”

@VictorIsreal wrote: “I don’t know how y’all see this but this sounds like a threat. If anything happens to any Nigerian in Kaduna who comes to stand in solidarity with Peter Obi, El Rufai should be held responsible.”