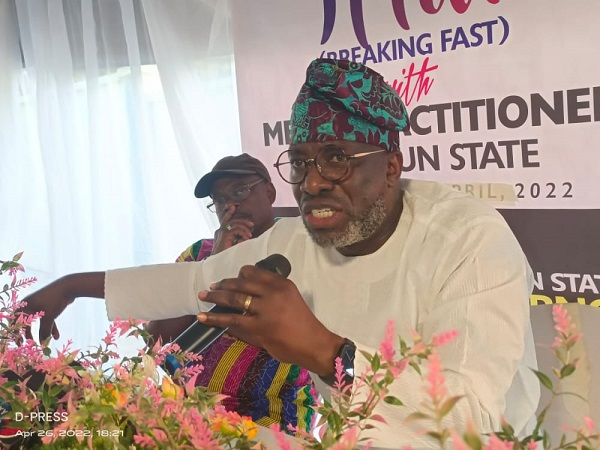 The Peoples Democratic Party, PDP has faulted claim that Segun Sowunmi has been declared its Ogun governorship candidate for the 2023 general election by the Court of Appeal.

The PDP, in a statement signed by its Director of media of Ladi Adebutu Campaign Organization Afolabi Orekoya said the judgement delivered by the appeal court appeal was only on jurisdiction and not on candidacy.

The party noted that Sowunmi in a suit with suit number AB/267/2022 instituted at the State High Court of OGUN State on 19th April had asked for an order of the court to dissolve the entire Executive of the OGUN state PDP led by Alh Sikirulah Ogundele.

Sowunmi had asked for the sack of the executive on the premise that it was biased in the sale of form for one of the aspirants for the governship ticket of the party.

In May 2022, Justice Abiodun Akinyemi of state High court had struck out the suit, describing it as a waste of time of the court and cannot be heard.

The release reads: “The purported affirmation of Segun Sowunmi as the candidate of Ogun PDP by the appeal court sitting in Abuja on Monday, 16th July, 2022 was a complete departure from the actual matter before the appeal court.

“The originating summons filed by Segun Sowunmi with suit number AB/267/2022 was instituted at the State High Court of OGUN State on 19th April, 2022 seeking an Order of the Court to dissolve the entire Executive of the OGUN state PDP on the premise that the State Exco of PDP was biased by obtaining form for one of the aspirants.

“An order seeking the barring of entire members of Ogun PDP Exco from conducting the primaries of the party.

“An order seeking the National Party to constitute a 3-man caretaker committee to conduct the party’s primaries.

“However, in the wisdom of Justice Abiodun Akinyemi of the State High Court on Thursday, 19th May, 2022, ruled that ‘I find and hold that this court has no justification to entertain this suit. Accordingly, it is struck out’.

“The above background is given for the general public to be well informed of the basis of Sowunmi’s appeal based only on jurisdiction and not candidacy.

“The appeal court only sat on whether the State high court has jurisdiction to hear his suit or not.

“The appeal court ONLY held that even though the matter is time bound but the State High court should have given him an opportunity to hear his matter.

“Therefore, the purported report on some media platforms that the appeal court affirmed that Segun Sowunmi is the candidate of the Peoples Democratic Party was fake and complete departure from the appeal court ruling.”