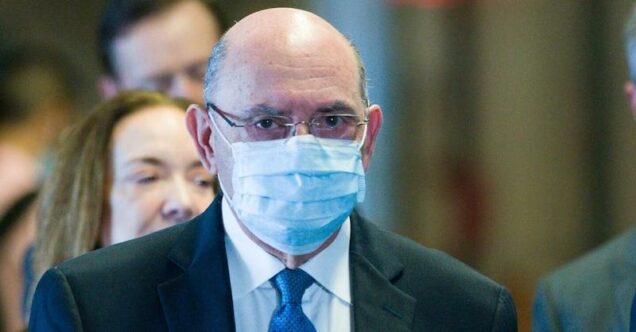 The guilty plea was an agreement that will require him to testify about its business practices at an upcoming trial.

Weisselberg, 75, the former chief financial officer at the Trump Organization, entered his plea to all 15 charges he faced in a New York state court in Manhattan.

Weisselberg, who has worked for Trump for about a half-century, is not expected to cooperate with Manhattan prosecutors in a larger probe they are conducting into Trump.

But his plea will likely strengthen their case against the former president’s company, which manages golf clubs, hotels and other real estate around the world.

“This plea agreement directly implicates the Trump Organisation in a wide range of criminal activity and requires Weisselberg to provide invaluable testimony in the upcoming trial,” Manhattan District Attorney Alvin Bragg said in a statement. “We look forward to proving our case in court.”

In a statement, a Trump Organisation spokeswoman called Weisselberg a “fine and honourable man” who has been “harassed, persecuted and threatened by law enforcement, particularly the Manhattan district attorney, in their never ending, politically motivated quest to get President Trump.”

She also said the company did nothing wrong, and looked forward to its day in court.

The Trump Organisation has pleaded not guilty, and faces possible fines and other penalties if convicted. Donald Trump, who is embroiled in many legal battles, has not been charged or accused of wrongdoing in the case.

Jury selection is scheduled to begin on Oct. 24, two weeks before the Nov. 8 midterm elections, where Trump’s Republican Party hopes to recapture both houses of Congress from Democrats.

Trump has yet to say whether he plans another White House run in 2024.

Prosecutors charged The Trump Organisation and Weisselberg in July 2021 with scheming to defraud, tax fraud and falsifying business records for awarding “off-the-books” perks to senior executives.

Weisselberg was accused of concealing and avoiding taxes on $1.76 million of income.

This included rent for a Manhattan apartment, lease payments for two Mercedes-Benz vehicles, and tuition for relatives, with Trump signing the tuition checks.

Weisselberg’s plea agreement calls for him to serve five months at the Rikers Island jail, though he could be freed after 100 days. It also include five years of probation, and the payment of $1.99 million in taxes, penalties and interest.

The jail sentence would begin after the Trump Organisation’s trial concludes. Weisselberg could have faced 15 years in prison if convicted at trial, including on a grand larceny charge.

During Thursday’s hearing, Weisselberg removed his mask as Justice Juan Merchan described each count of the indictment. Weisselberg agreed that the accusations against him were true.

Nicholas Gravante, a lawyer for Weisselberg, said in a statement: “In one of the most difficult decisions of his life, Mr. Weisselberg decided to enter a plea of guilty today to put an end to this case and the years-long legal and personal nightmares it has caused for him and his family.”

Weisselberg gave up the CFO job after being indicted, but remains on Trump’s payroll as a senior adviser.