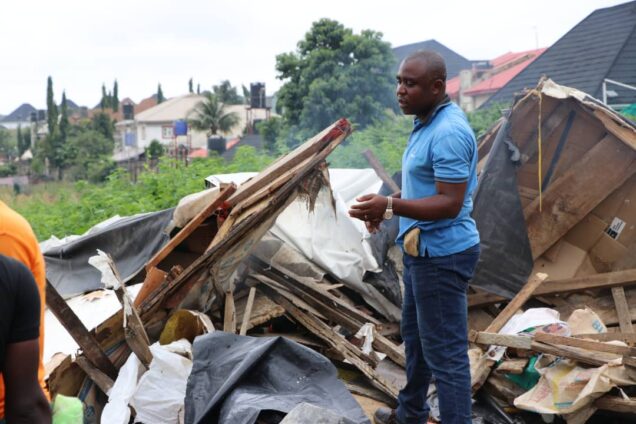 One of the demolished structures in Gwarinpa, Abuja

The Federal Capital Territory Administration (FCTA) has vowed to sustain the demolition of illegal structures, markets and shanties built on the encroached rail corridor in Gwarinpa.

Mr Ikharo Attah, Senior Special Assistant on Monitoring, Inspection and Enforcement to the FCT Minister, stated this after clean up exercise at Gwarinpa, on Friday in Abuja.

Attah explained that the exercise was being coordinated by a joint Taskforce team which comprises FCTA Senior officials, the Nigerian Army, the Nigeria Police Force, as well as Federal Road Safety Corps.

He listed others to include the Department of State Services, the FCT Directorate of Road Traffic Services, and the Abuja Environmental Protection Board (AEPB).

The minister’s aide said that the joint taskforce team stormed the Gwarimpa rail corridor unannounced to commence the demolition of shanties, markets and butchers defacing the area.

According to him, the shanties were not only cleared but also burnt to ashes with a view to preventing a comeback of the illegal structures and market.

Attah said that the FCT Minister, Malam Muhammad Bello and the FCT Commissioner of Police, Mr Sunday Babaji, had renewed their commitment to clearing all criminal hideouts in the nation’s capital.

He said: ” We are here for several reasons, the first one is that there have been a series of complaints over this place.

”Secondly, the issue of city sanitation is a problem here and general issues of insecurity here. This is Hayari market, we cleared it last year and this year we have come again to clear it because the traders returned.

“The FCT Police Commissioner, Babaji, and Police Divisional Police Officer (DPO) in Gwarinpa had gotten a report of criminal activities going on here.

”The residents had also complained very bitterly of people trying to hide here as cover to rob neighbourhoods, and that has been very alarming.”

Attah revealed that during the exercise, some arrests were made of people carrying illicit drugs by the NDLEA of the Command and Control JTF team under the CP of FCT and DC Bernard Iwe.

“The police also arrested three suspected criminals, and the NDLEA arrested two people allegedly peddling drugs. This is a big task, but we are not given up. We will keep coming until they stop coming,” he added.